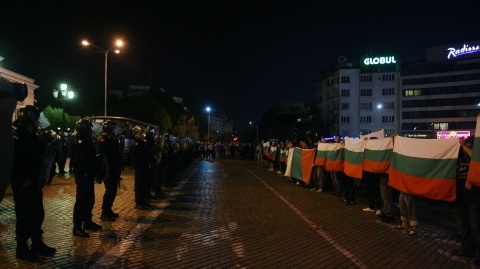 On the second night of protests against the murder of 19-year-old Angel Petrov in the village of Katunitsa police adopted a new strategy to calm down the protestors across the country, making attempts to talk to them. Photo by Sofia Photo Agency

A spokesperson for the European Commission has condemned what has been presented as anti-Roma rallies in Bulgaria over the last couple of days.

The European Commission has expressed its concern over the anti-Roma demonstrations in Bulgaria and says it is monitoring the situation, EU Commission press secretary Matthew Newman said on Wednesday, as cited by the Russian RIA Novosti news agency.

The EC has not commented on the actions of the Bulgaria's law enforcement authorities, which it says are within the competence of the authorities, according to the agency. The bloc has demanded all its member states to present Brussels with a plan by the end of this year for integration of Roma communities in socio-economic life.

The recent death of Bulgarian youngster Angel Petrov, who was allegedly deliberately run over by a mini-bus driven by a relative of notorious Roma crime boss Kiril Rashkov aka Tsar Kiro, led to massive protests of the ethnic Bulgarians in the southern village of Katunitsa. They culminated Saturday night into the burning of Rashkov's properties by football hooligans from Plovdiv, which is near to Katunitsa.

On Wednesday, it was announced that Rashkov has been detained by the police.