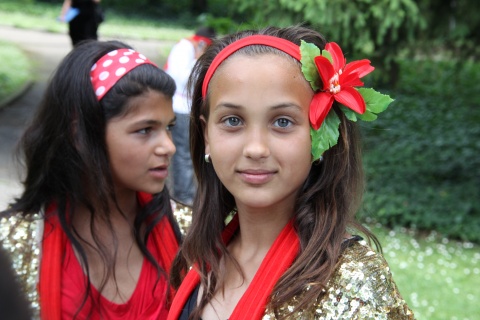 On October 1, Roma children will distribute at key junctions in the capital Sofia their drawings and essays to mark the first ever Roma Pride event in Bulgaria. Photo by BGNES

The Bulgarian Roma NGO, Center for Inter-ethnic Dialogue and Tolerance "Amalipe" vows to answer to clashes sparked by discontent of residents of the southern village of Katunitsa with scores of children essays, drawings, and flowers.

The NGO is also one of the main organizers of the first Roma Pride parade, which was planned for October 1.

Teodora Krumova, Deputy Chair of the Center, informs that in the light of the latest developments, the agenda of the event had been changed and scaled-down – there would not be a large Roma march similar to the Gay Pride parades over the threat of possible attacks on participants. She, however, pointed out a large parade had not been planned at all.

Instead, Roma children will distribute at key junctions in the capital Sofia their drawings and essays they have written, titled "I Am Proud to Be Bulgarian and Roma."

Similar events will be held in a number of communities across Bulgaria where Roma will present their culture and traditions.

"We want to show that we have many things to be proud of and that violence is not the solution," Krumova says.

When asked if she was not alarmed that the participants could still become a target, the NGO representative countered she could not imagine anyone in Bulgaria reacting negatively to such initiatives, especially when they feature children.

Krumova, however, informed that the Center has been inundated by calls from Roma from all over the country, reporting they were afraid to go to work and send their children to school. She thanked the authorities for acting timely on signals about possible threats.

Tensions in Bulgaria were sparked by the September 23 murder of Bulgarian youngster, Angel Petrov, 19, who was deliberately run over by a mini van, driven, according to witnesses by one of the relatives of notorious Roam boss from Katunitsa, Kiril Rashkov AKA Tsar Kiro. The murder led to massive protests of the ethnic Bulgarians in the village, where Tsar Kiro's mansions are located. They culminated Saturday night into the burning of Rashkov's properties by football hooligans from Plovdiv, which is near to Katunitsa, and by football club fans from the capital Sofia and the southern city of Stara Zagora.