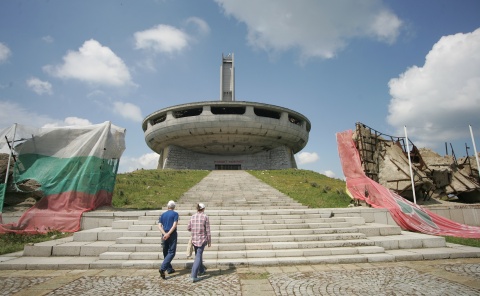 The Buzludzha monument. Photo by BGNES

Until now the monument and surrounding land were State property.

The left-wing is receiving property of about 3 000 square meters. The goal is to relieve the Governor of the southern Region of Stara Zagora from the responsibility of managing the complex which is crumbling over the lack of funds and is in deplorable state.

On September 19, during the official inauguration Bulgaria's Museum of Socialist Art, Bulgaria's Prime Minister, Boyko Borisov, informed that the historic Buzludzha monument would be returned to BSP on September 28.

"We shall let them take care of it because here it also holds true that a party which does not respect its past and its symbols has no future", Borisov stated then.

At the beginning of August, BSP submitted a petition, calling for the free-of-charge transfer of ownership of the monument.

Buzludzha is a landmark site for Bulgaria's left-wing because the foundations of the Socialist Movement in Bulgaria were laid there in 1891.

The concrete, UFO-like structure, resides on top of Mount Buzludzha. It was unveiled in 1981 on the occasion of the 1300th anniversary of the founding of the Bulgarian state. Next to the pie-shaped structure stands a 70-meter concrete pillar. On the inside of the monument one can see gilded mosaics depicting Bulgarian and Soviet communist leaders like Dimitar Blagoev, Georgi Dimitrov, Todor Zhivkov, Vladimir Lenin, Joseph Stalin, Vladimir Lenin and Leonid Brezhnev. Buried in the ground beneath the monument is a capsule containing a message for the future.

However, the once awe-inspiring monument has now degenerated into a decrepit building providing shelter for Satanists gathering, drunkards and hobos. Graffiti artists have sprayed a giant red-colored "Forget Your Past" moto right above the padlocked entrance.

The socialists' claim, filed with the local administration in Stara Zagora, cited Bulgaria's State Property Act and was addressed to then Regional Development Minister Rosen Plevneliev, now presidential candidate and to Borisov.

The Buzludzha monument sparked wrangling between BSP and the center-right, ruling Citizens for European Development of Bulgaria, GERB, party after in end-July Stara Zagora District Governor Yordan Nikolov issued an ordinance banning access to the monument on the basis of its dangerously dilapidated condition one day ahead of the traditional BSP gathering .

Despite the ban, BSP lit the five-pointed star on the monument using electricity from a nearby private lift.