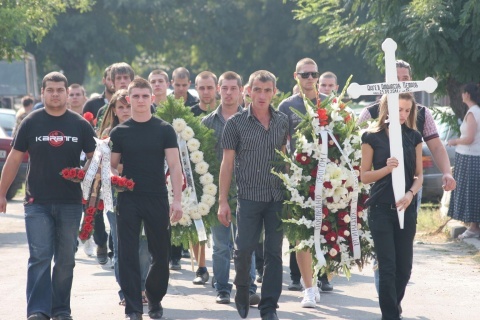 Notorious Bulgarian Roma boss from the southern village of Katunitsa, Kiril Rashkov, had been once again able to trick everyone by replacing the driver who killed a young man from the same village.

The claim was made Tuesday by Petar Georgiev from Katunista, who is listed in the hospital of the second largest city of Plovdiv.

Georgiev is one of the five people who sustained injuries in the night of the murder of 19-year-old Angel Petrov, and his condition is the most serious. He has a broken pelvis and will spend at least 20 days under doctors' care.

The September 23 murder of Bulgarian youngster, Angel Petrov, 19, who was deliberately run over by a mini van, driven by one of Rashkov's relatives, according to witnesses, led to massive protests of the ethnic Bulgarians in the village. They culminated Saturday night into the burning of Rashkov's properties by football hooligans from Plovdiv, which is near to Katunitsa, and by football club fans from the capital Sofia and the southern city of Stara Zagora.

Bulgarian authorities have frozen Rashkov's assets and property while he is investigated on tax evasion charges, the revenues agency has confirmed. Interior Ministry Chief Secretary Kalin Georgiev told the morning broadcast of Nova TV channel Wednesday that Rashkov, AKA Tsar Kiro, has been arrested.

A reporter from the Bulgarian 24 Chassa (24 Hours) daily writes that a team from the newspaper visited Georgiev in the hospital and found him in the company of 5 friends – all have been adamant that the man arrested for the murder, Simeon Yosifov, 55, from the Plovdiv Roma district of Stolipinovo, is not the same person who had driven the van during the fatal night.

According to official police reports, after committing the crime, Yosifov briefly escaped to neighboring Turkey, but relatives convinced him to come back. He was arrested upon his return.

Georgiev and his friends, however, say that the real murderer was sent to Turkey and was replaced by an individual who new nothing about the incident in order to not reveal anything about Tsar Kiro during police interrogations.

Georgiev and his friends believe the murder was well planned, pointing out that three days before September 23, Rashkov had signed new insurance policies on his properties, and emptied his houses from everything valuable. The latter had been confirmed by a report of the TV channel bTV.