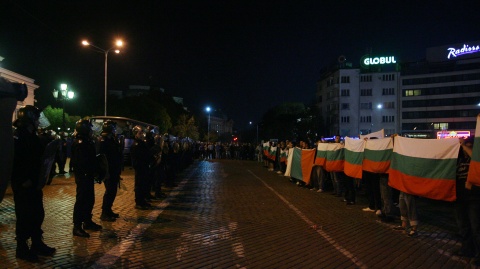 On the second night of protests against the murder of 19-year-old Angel Petrov in the village of Katunitsa police adopted a new strategy to calm down the protestors across the country, making attempts to talk to them. Photo by Sofia Photo Agency

A total of 168 people have been arrested by the police in several Bulgarian cities after a wave of small-scale but vigorous rallies Tuesday night.

More than two thousand protesters rallied for the second night in a row against the murder of 19-year-old Angel Petrov in the village of Katunitsa by associates of notorious Roma boss Kiril Rashkov, aka Tsar Kiro – but also because of the "Roma issue", i.e. what they see as a "privileged situation" of the Roma minority in Bulgaria.

Some 600 came together in Plovdiv, another 600 were in Sofia and 400 in Varna, with smaller rallies in several other cities.

The protesters – who included football fan clubs and far-right groups, according to the police – clashed with riot police, gendarmerie and Civic Protection officers in Plovdiv, Sofia, Varna.

They were armed with hand-made bombs, knives, clubs, pipes from vacuum-cleaners and hammers.

Meanwhile, Roma population across the country awaited attacks, armed with shovels, axes, sticks, and guns at some spots, if protester accounts are to be trusted.

Chief Secretary Kalin Georgiev has assured that there is increase police presence all over the country.

"The institutions of the Interior Ministry will be uncompromising against any instance of intolerance and any case of violation of the public order," Georgiev declared.

Tensions across major Bulgarian cities grew Monday night as a result of protest rallies across the country when more than 100 people were arrested by the police for violence.

The protests came a day after Plovdiv nearly became the center of ethnic clashes between ethnic Bulgarians and ethnic Roma over the weekend, following the murder in the nearby village of Katunitsa of 19-year-old Angel Petrov by associates of notorious Roma boss Kiril Rashkov, aka Tsar Kiro, committed Friday night.

Tensions escalated all over Plovdiv Monday night in spite of the relative calm that appeared to have set earlier on Monday after President Georgi Parvanov and Prime Minister Boyko Borisov visited the city, and community leaders of the local ethnic Roma and ethnic Turks voiced messages for tolerance and ethnic peace.