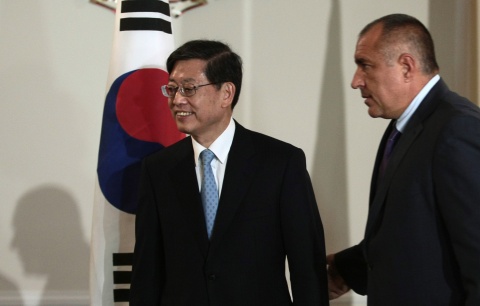 A Bulgarian-South Korean business forum was held Tuesday in the capital Sofia in the frame of the official visit of South Korea's Prime Minister Kim Hwang-sik to the country.

Presentations at the forum included economic and investment climate in Bulgaria from the Bulgarian Investment Agency; construction and infrastructure projects from the Road Infrastructure Agency, and a review of the policies of the Ministry of Transport, IT, and Communications on the future online government.

The Korean Trade-Investment Promotion Agency (KOTRA) director, Lee Kwan-seok, presented his country's construction activities abroad, saying contractors from the Middle East have achieved a volume of USD 275 B, which is 61% of the global market share. Korean construction businesses build abroad mainly public and industrial buildings and industrial equipments such as an artificial river in Libya, an industrial complex in Mexico, a highway in Pakistan and the highest building in the world in Dubai. Since the beginning of 2011, a Korean company is building a housing complex in Bulgaria.

Kwan-seok also presented projects of Korean builders across Europe. The number of projects across the world exceed 8 000. He assessed perspectives for partnership with Bulgaria as very strong, saying they would include cooperation in water purification, energy, housing and public buildings construction.

Four contracts between Bulgarian and Korean companies were signed during the forum.

Prime Minister Kim Hwang-sik addressed the forum, stressing on Bulgaria's reputation as producer of yogurt and as grower of the famous Bulgarian rose.

"The agreement on free trade between the two countries will boast their relations," he said.

The PM pointed out Hyundai Industries and the solar panels in the village of Somovodene in central Bulgaria as an example of successful investment in the country, noting Korean entrepreneurs are convinced Bulgaria has attractive conditions for doing business. He listed as key sectors for partnership IT, renewable energy sources, and infrastructure construction.

His Bulgarian counterpart Borisov also addressed the forum, saying the fact Hwang-sik's visit to the European Union begins in Bulgaria, is indicative of the importance of the partnership between the two countries.

Borisov informed that topics of the negotiations included partnership in the online government, export of grain to Korea, cultural tourism, innovations, education, and infrastructure projects such as the building of a cargo terminal in the southern city of Stara Zagora.

The two countries signed Tuesday an agreement for mutual recognition of drivers licenses.

The PM reiterated the fact Bulgaria offers excellent conditions for doing business such as stability, the strive to use ecologically clean activities in order to preserve the environment, and the key geographical location between Europe and Asia.