NGO Alarmed by Mishandling of Journalists during Bulgarian-Roma Tensions 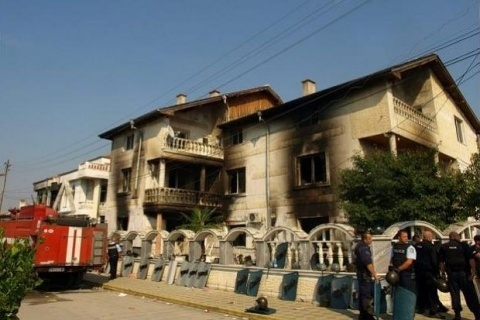 Properties of Roma boss Kiril Rashkov in the Bulgarian village of Katunitsa, known as The Castle, were set on fire by protesting local ethnic Bulgarians. Photo by DarikNews

The Association of European Journalists-Bulgaria, a non-government organization, has expressed its deep concern regarding what they perceive as violence against journalists during the recent protest in the southern village of Katunitsa.

Reporters were threatened and beaten during the events that took place, the NGO says in its statement. The journalistic association reminds that, according to the Bulgarian constitution, one has the right to refuse being photograph, but the rule does not apply to cases involving rallies, protests and other large-scale social events, hence the protestors' violent reactions were unjustified.

The organization also condemns the case in which protestors forcefully took away the microphone of Mirolyuba Benatova, a popular reporter from the bTV private channel. "The campaign against Benzatova is wrong and unjustified," according to the statement.

The murder of Bulgarian youngster Angel Petrov, who was deliberately run over by a mini-bus, according to witnesses, led to massive protests of the ethnic Bulgarians in the village of Katunitsa against notorious mafia boss Kiril Rashkov's Roma clan on Saturday, culminating Saturday night into the burning of Rashkov's properties by football hooligans from Plovdiv, which is near to Katunitsa.

Some of the protesters assaulted a cameraman of the bTV channel, breaking his camera, and leading him to get in a car in order to escape.

The protesters are angry at bTV and especially reporter Mirolyuba Benatova claiming that she favored the ethnic Roma in her coverage of the crisis in Katunitsa.