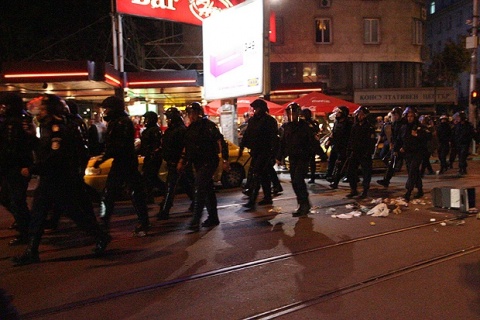 Riot police and gendarmerie units have managed to stave off attempts by violent protesters to storm Roma-populated quarters in Bulgaria's Varna, Pleven, and Pazardzhik, which come on top of the clashes in Sofia and Plovdiv.

A group of 150 youngsters tried to attack the Roma-populated quarter in the northern city of Pleven but were fended off by the local police which had to mobilize its entire staff. Before that, however, the protesters violated a local club of the ethnic Turkish party DPS (Movement for Rights and Freedoms), Darik Radio reported.

A likely pogrom on the Roma-populated quarter Maxuda was also prevented by the police and gendarmerie in Bulgaria's Varna, after a rally of 1 000 participants escalated Monday night.

The rally notably featured the fan clubs of local football teams Spartak Varna and Cherno More as well as about 100 bikers.

Not unlike the developments in Sofia, Plovdiv, Varna, and Pleven, in the southern city of Pazardzhik, the police cordoned off the Roma quarter Iztok, and prevented large groups of people from trying to enter it.

Tensions across major Bulgarian cities grew Monday night as a result of protest rallies across the country, after on Sunday Plovdiv nearly became the center of ethnic clashes between ethnic Bulgarians and ethnic Roma over the weekend, following the murder in the nearby village of Katunitsa of 19-year-old Angel Petrov by associates of notorious Roma boss Kiril Rashkov, aka Tsar Kiro, committed Friday night.

Sunday night's rallies in Sofia, Plovdiv, Varna, Pleven, and Pazardzhik led to clashes between police and violent protesters, with hundreds being arrested.