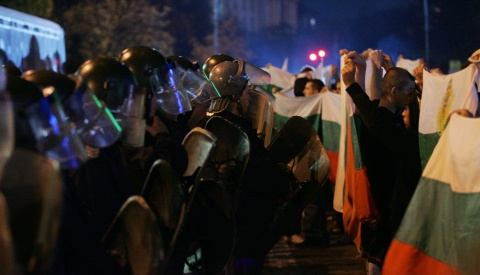 About a thousand protesters were dispersed by riot police in Sofia late Monday night after clashes erupted earlier. Photo by BGNES

The clashes between protesters and riot police in downtown Sofia got out of hand as close to a thousand protesters tried to target the Sofia mosque.

After clashing briefly with police and gendarmerie forces at the National Assembly square near the Parliament building in Sofia, the protesters decided to target the Sofia Mosque Banya Bashi, but were repulsed by the riot police on the spot.

The mosque was cordoned off and the police stopped the traffic in the entire area.

It has been confirmed that the police forces in Sofia resorted to mobilizing staff from the Civic Protection service. Many of the top riot police detachments from Sofia were transported and deployed in Plovdiv and the village of Katunitsa Sunday night.

As they tried to target the mosque, the protesters were met by riot police near the Bulgarian Presidency and Council of Ministers buildings, and were repulsed and chased down the Vitosha Blvd, the main shopping street in Sofia.

While running away from the police, the protesters knocked down garbage containers but were met by other police units and were ultimately scattered before they could reach the National Palace of Culture square.

The clashes erupted after protesters started to throw stones and bottles at the police on the square before the Parliament building, with the situation reminding a scene from a Bulgarian stadium with high activity on part of football hooligans.

The downtown of the Bulgarian capital was in chaos Monday night, and it is still unclear how the clashes will develop throughout the night.

The government and the police authorities have made no formal statements about the situation.