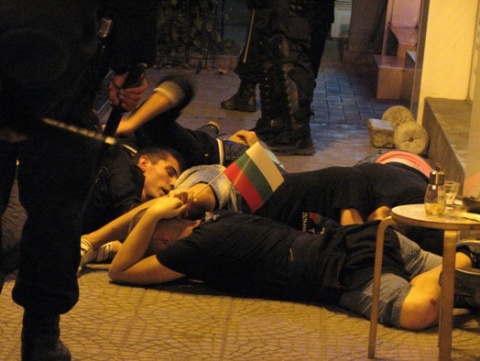 Pictured: hundreds of violent protesters were rounded up and arrested by riot police in Plovdiv Monday night. Photo by Podtepeto.com

Hundreds of violent protesters have been busted in Bulgaria's Plovdiv after the riot police and gendarmerie moved to break up the rally of some 3000 Monday night.

The protesters threw bottles, stones, and even road signs at the police but were rounded up before the St. Petka church, and scattered.

Hundreds were arrested, but a number of them managed to escape, local news websites reported, as of 10 pm Monday.

The detainees are primarily youngsters, both male and female. The police ever ran short of buses to transport even all of them.

Earlier Monday night, protesters have clashed with gendarmerie and riot police in Bulgaria's Plovdiv, as local tensions escalate during protests against the murder of 19-year-old Angel Petrov in the village of Katunitsa but also because of problems associated with Bulgaria's Roma minority.

The crowd of youngsters, which likely included far-right groups and football hooligans, clashed with gendarmerie on the Maria Luiza Blvd in the city, delineating the location of ethnic Roma-populated Adzhasan Mahala.

Even though Monday night's rally in Plovdiv started peacefully on the Unification square, as dusk arrived, emergency alerts came from various parts of the city.

The riot police are reported to have started to arrest protesters. The police have even found themselves forced to resort to pulling out gendarmerie forces from the nearby village of Katunitsa in order to transfer them to Plovdiv.

Several dozens of youth shouting nationalist slogans have besieged at one point the Dzhumaya Mosque but were beaten back by riot police.

Tensions were reported to be escalating all over Plovdiv Monday night in spite of the relative calm that appeared to have set earlier on Monday after President Georgi Parvanov and Prime Minister Boyko Borisov visited the city, and community leaders of the local ethnic Roma and ethnic Turks voiced messages for tolerance and ethnic peace.