Clashes between Protesters, Police Break Out in Sofia 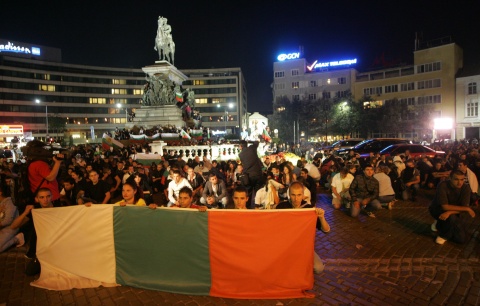 Protesters are seen in a minute of silence in memory of the murder victim in the village of Katunitsa before the Bulgarian Parliament Monday night, shortly before clashes with the riot police erupted. Photo by BGNES

Protesters have clashed with gendarmerie and riot police in Sofia Sunday night, as tensions escalated during protests against the murder of 19-year-old Angel Petrov in the village of Katunitsa but also because of problems associated with Bulgaria's Roma minority.

The clashes in Sofia came after the riot police and gendarmerie already clashed in Plovdiv Monday night.

About 1 000 protesters are rallied at the National Assembly square in Sofia, as the Parliament building is heavily guarded by police.

In addition to racist slogans, the protesters have hurled stones at the police and gendarmerie officers.

The police have sealed a large section of downtown Sofia boulevard Tsar Osvoboditel.

The crowd of youngsters includes far-right groups and football hooligans, according to the police.

The new rallies, which were organized on Facebook and started at 7 pm in both cities, come after on Sunday Plovdiv nearly became the center of ethnic clashes between ethnic Bulgarians and ethnic Roma over the weekend, following the murder in the nearby village of Katunitsa of 19-year-old Angel Petrov by associates of notorious Roma boss Kiril Rashkov, aka Tsar Kiro, committed Friday night.