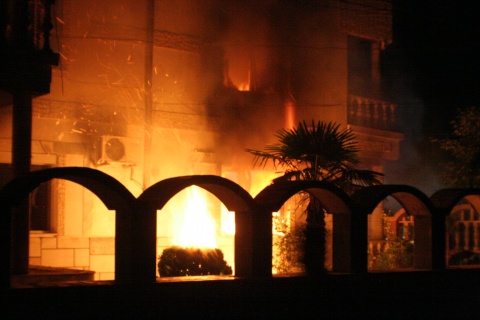 The luxury estate of Tsar Kiro engulfed in flames as residents of Katunitsa protest the murder of 19-year-old Angel Petrov by the Roma boss' clan. Photo by BGNES

The Bulgarian Helsinki Committee (BHC) has called on local authorities to respond adequately to the clashes in Katunitsa and prevent attempts to use the case to whip up inter-ethnic tensions.

In an open letter to Prime Minister Boyko Borisov, BHC Chair Krasimir Kanev demanded harsh sanctions for high-ranking officials of the Interior Ministry who had committed "unprofessional actions and inactions".

The head of the human rights non-governmental organization claimed Monday that the case involved "utterly unprofessional conduct on the part of the Interior Ministry, a total failure of the institution to guarantee the safety of citizens and uphold public order".

In Kanev's words, officials of the Interior had passively witnessed a spate of grave crimes unfold in front of their eyes, which had resulted in racist rioting and had caused social tensions to spike in other parts of the country.

In its written statement BHC also demanded a quick and efficient investigation that would shed light on the murder in the village of Katunitsa, the organizers of the riots, the demonstrators chanting racist and anti-Roma slogans and the perpetrators of the racially motivated arsons.

The NGO further encouraged the Interior towards a much more active role in the prevention of race-based gatherings for criminal purposes, regardless of the existence of party affiliations of the organizers.

"Apart from that, public security organs must investigate the overt organization of such venues in social networks like Facebook and make sure that both orchestrators and participants are brought to criminal liability", BHC stated.

In another Monday statement on the matter, Bulgaria's Civil Initiative "People Against Racism" protested against what it saw as an attempt to present a social conflict opened by the crime committed by Tsar Kiro's clan as an ethic problem.

"People Against Racism"'s protest campaign consisted in the widespread distribution of leaflets and posters.

The conflict in the village of Katunitsa, located in southern Bulgaria, near the second largest city of Plovdiv, erupted after associated of notorious Roma boss Kiril Rashkov AKA Tsar Kiro from the Plovdiv district of Stolipinovo ran over and killed 19-year-old Angel Petrov from the village late Friday.

The incident triggered widespread violence and protests which culminated Saturday night in an attack on Rashkov's properties staged by by football hooligans from Plovdiv.

Pavel, 16, a friend of Angel, passed out during the Friday attacks on Rashkov's properties and later died in the hospital.

The boy had undergone bypass surgery several years ago.