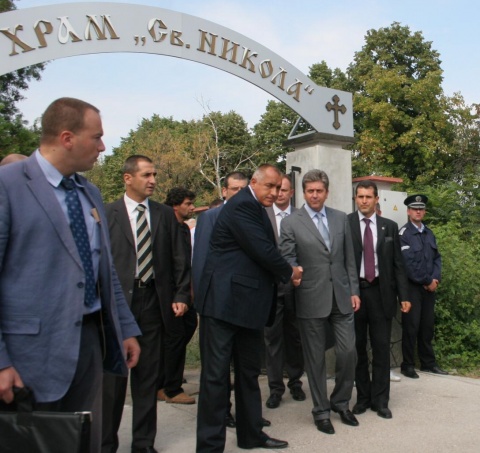 Bulgarian Prime Minister Boyko Borisov and President Georgie Parvanov (middle) shake hands during their visit in the village of Katunitsa. Photo by BGNES

The outbursts of violence in Bulgaria's Plovdiv and the village of Katunitsa are not ethnic-based but "personal", President Georgi Parvanov and Prime Minister Boyko Borisov declared jointly.

Parvanov and Borisov visited the southern city of Plovdiv Monday, which nearly became the center of ethnic clashes between ethnic Bulgarians and ethnic Roma over the weekend, following the murder in the nearby village of Katunitsa of 19-year-old Angel Petrov by associates of notorious Roma boss Kiril Rashkov, aka Tsar Kiro, committed Friday night.

Bulgaria's President Georgi Parvanov and Prime Minister Boyko Borisov – who are technically political opponents – met in the building of the Regional Police Directorate in Plovdiv Monday before visiting Angel Petrov's relatives in the village of Katunitsa in the afternoon.

Both Parvanov and Borisov sought to make clear their declarations that any toying with "the ethnic card" in Bulgaria "would not lead to anything good."

Borisov especially appealed to the media and the public not to let the conflict in Katunitsa turn into an ethnic conflict since, among other things, that could compromise the upcoming presidential and local elections on October 23, 2011.

The President and the PM also demonstrated agreement on their positions with respect to the actions of the police over the weekend. Both of them believe that while the police and gendarmerie forces did a good job preventing an escalation of tensions in Plovdiv on Sunday, their initial reaction to the crisis in Katunitsa Saturday was inadequate.

"The police did well yesterday. As far as their initial reaction is concerned, however, I fully share the Prime Minister's assessment. These were sluggish actions, and they could have reacted much more adequately," Parvanov said at his meeting with Borisov, Chief Secretary of the Interior Ministry Kalin Georgiev, and the head of the Plovdiv Police Directorate Todor Chonov, as cited by Focus.

The head of state further said he totally understands people's feelings and demands for justice but stressed that the law enforcement authorities need to play by the rules and protect law and order.

"The state institutions will be united, we will be sufficiently firm in our reaction to radical, extremist attitudes," Parvanov said with respect to the possible provocations of ethnic clashes.

"According to my information, and it was just confirmed at this meeting, there is no ethnic tension in Katunitsa. Problems there are personalized, and have to do with the family of Kiril Rashkov. But we can also see from yesterday's events that these protests also have ethnic connotations. There have been extremist chants, and there is no way we can't be concerned about that," the President said.

He further emphasized that the Bulgarian state is fully capable of protecting the interest of its citizens, and that no self-imposed justice should be allowed.

"Apparently, there are such (i.e. extremist – editor's note) moods. But I think that what happened yesterday showed that the police are right where they need to be. They not only kept the two sides apart but also managed to calm the tensions, which I hope will be a permanent thing," the President said.

Parvanor also declared, as cited by BTA, that if notorious Roma baron Kiril Rashkov, aka Tsar Kiro, continued to issue threats against the rest of the people in the village of Katunitsa, he would face the legal consequences in full.

"I see there are radical political and non-political groups but I am stressing the ones that are trying to ride the wave. And you are the ones that need to reign them in more powerfully than us two," Parvanov told journalists in Plovdiv.

Borisov in turn emphasized that if anybody won the upcoming elections amidst ethnic tensions, Bulgaria would be isolated within the EU, and these fact would be constantly reminded to him on the international stage.

"I declare full solidarity with the President's statements. I thank him for coming here for this meeting with our colleagues from the Interior Ministry and the District Prosecutor," the PM said, stressing that the Bulgarian institutions will be united in their actions regarding the events in Katunitsa and Plovdiv.

He explained he explicitly told the police they have no way of allowing burning buildings and still believe that did their job.

"What they told me (about the situation in Katunitsa Saturday night – editor's note) is that the situation was such that clashes between the gendarmerie and those who started the fires would not have gone without casualties. I understand their motivation on the ground but if I were in their place, I would have sealed off the area, and would not have allowed the arsons," said Borisov, a former Interior Ministry Secretary and a former professional fire-fighter.

After their meeting in Plovdiv, Borisov and Parvanov met in the village of Katunitsa with the relatives of Angel Petrov and another boy, 16, who died of a heart failure during the protests on Saturday. However, they refused to meet with all locals who expected an opportunity to explain their grievances to the state leaders.