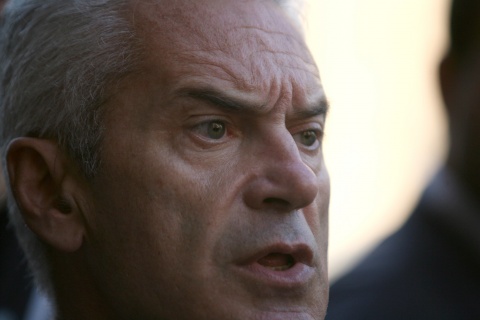 Siderov, who is running for President for a second consecutive time this fall, stated that the presidential building was "a bunker in which Parvanov and his staff are hiding." Photo by BGNES

Volen Siderov, the flamboyant leader of Bulgaria's far-right Ataka (Attack) party, has tried to force his way into the country's presidential building and hand out a special declaration to President Georgi Parvanov concerning the recent ethnic tensions in the country.

"The Roma criminal activity is dangerous for the country, for the system of state and for the state's security," Siderov declared Monday, as cited by the Focus news agency. The controversial nationalist leader tried to open the door of the Presidential building's main entrance, only to find out it was closed.

Siderov, who is running for President for a second consecutive time this fall, stated that the presidential building was "a bunker in which Parvanov and his staff are hiding," after he did not succeed in personally delivering his declaration inside. Police officers were quick to lead away the nationalist.

Parvanov, together with Prime Minister Boyko Borisov, was in the southern village of Katunitsa while Siderov tried to contact him. It was Katunitsa where the ethnic tensions in the country erupted late on Friday.

Tensions in the entire Plovdiv region escalated after Roma associates of notorious "businessman" Kiril Rashkov aka "Tsar Kiro" from the Plovdiv district of Stolipinovo ran over and killed 19-year-old Angel Petrov from the village of Katunitsa late Friday. The incident flared large-scale violence and protests which culminated Saturday night in an attack on Rashkov's properties, allegedly staged by several hundred football fans.

Monday is a day of mourning in the village. Angel was buried Sunday with a crowd of over 2 000 gathering to bid farewell to the young man. The mourning father insisted his son was killed on Tsar Kiro's orders.