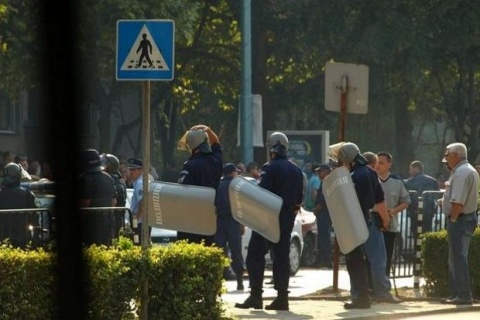 Pictured: riot police are trying to reign in tensions between Bulgarians and Roma in the city of Plovdiv Sunday night. Photo by Darik Plovdiv

The information was reported Monday by the Bulgarian Standart (Standard) daily, citing the Chair of the Supreme Roma Court, Hristo Varbanov AKA The Pope, who said that "not a single person, not a single Roma would stand up for Rashkov."

Tensions in the entire Plovdiv region escalated over the weekend after Rashkov's Roma associates from the Plovdiv district of Stolipinovo ran over and killed 19-year-old Angel Petrov from the nearby village of Katunitsa late Friday. The incident flared large-scale violence and protests which culminated Saturday night in an attack on Rashkov's properties, allegedly staged by several hundred football fans.

The meshere convened two days after Angel's murder with all 11 members voting unanimously to not back Rashkov and his clan.

Standart further writes that the Roma Court issued a symbolic "death sentence" to Rashkov, further quoting Varbanov, who pointed out "this was the true rule of the meshere, and if it had real power it would sentence Rashkov to death by hanging to set an example to others."

Rashkov told Standart he did not care about the rule, nor about Varbanov's opinion or the one of the leader of the Roma party Evroroma, Tsvetlin Kanchev, who has also been critical to him, because both "were Bulgarians, not Roma."

"The Pope should go on and keep racketeering people, which he knows how to do best," said Tsar Kiro said.

Meanwhile, talks between President, Georgi Parvanov, Prime Minister, Boyko Borisov, the leadership of the local police, the Head of the Plovdiv Police Directorate, Commissar, Todor Chonov, the Head Secretary of the Interior Ministry, Chief Commissar, Kalin Georgiev, are discussing in Plovdiv the situation in Katunitsa. All, including Parvanov and Borisov, have cancelled their planned agendas for Monday in order to attend.

The Mayor in Charge of Plovdiv, Alexander Dolev, announced earlier Monday that crisis headquarters have been established in the city to prevent further escalation of ethnic tensions and any new incidents of violence.

The news about the move and the talks comes on the backdrop of information that tensions in Katunitsa are slowly subsiding and the situation remained calm Sunday night into Monday.

In a Monday morning interview for bTV, Borisov, when commenting on the events in Katunitsa, vowed to bring impunity in Bulgaria to an end.