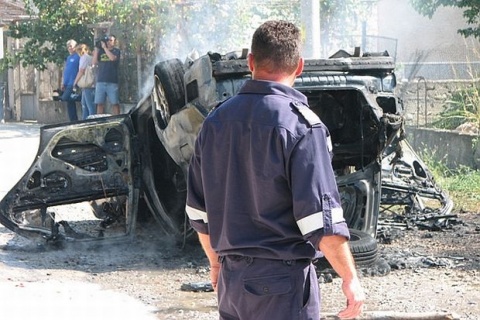 Angry Bulgarians attacked the property of Roma boss Tsar Kiro and his family in the village of Katunitsa, near Plovdiv, over the weekend, amidst escalating ethnic tensions. Photo by BGNES

The Regional Court in the town of Asenovgrad, near Bulgaria's second largest city of Plovdiv, has ruled in 25 cases related to charges of vandalism and hooliganism.

All cases, which relate to clashes between ethnic Bulgarians and Roma in the village of Katunitsa, have been tried Sunday, according to information of the Plovdiv Regional Court's press center, as reported Monday.

29 individuals have been sentenced with 27 of them fined while 2 remain under arrest.

The Asenovgrad magistrates deemed the said individuals have not participated in acts of destroying property, arson, physical violence and attacks on citizens or police employees – there has not been such evidence in the citations written by the police.

Those who were fined have been detained on Katunitsa's streets for violating public order by shouting and cursing. The two, who remain under arrest, have been found guilty of destroying someone's property.

The press center further point out that under the Order for the Fight against Small-scale Hooliganism, the latter represent an undignified act, expressed in the use of foul language in public, in offensive statements to others and to the authorities, quarreling, fighting and other similar actions – such actions are violations of public order, but over the low-level of threat to the public, they are not considered a crime. The fines range from BGN 100 to BGN 500; other sanctions include detention up to 15 days.

Meanwhile, talks between President, Georgi Parvanov, Prime Minister, Boyko Borisov, the leadership of the local police, the Head of the Plovdiv Police Directorate, Commissar, Todor Chonov, the Head Secretary of the Interior Ministry, Chief Commissar, Kalin Georgiev, are discussing in Plovdiv the situation in Katunitsa. All, including Parvanov and Borisov, have cancelled their planned agendas for Monday in order to attend.

The Mayor in Charge of Plovdiv, Alexander Dolev, announced earlier Monday that crisis headquarters have been established in the city to prevent further escalation of ethnic tensions and any new incidents of violence.

The news about the move and the talks comes on the backdrop of information that tensions in Katunitsa are slowly subsiding and the situation remained calm Sunday night into Monday.

Meanwhile, in a Monday morning interview for bTV, Borisov, when commenting on the events in Katunitsa, vowed to bring impunity in Bulgaria to an end.