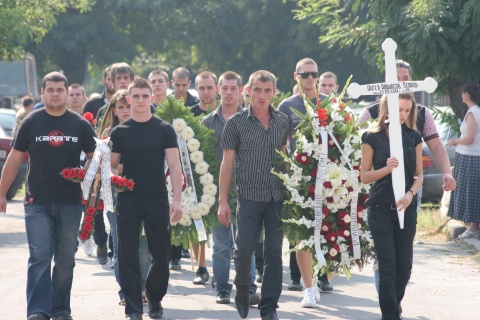 Thousands of people across Bulgaria honored the memory of the victims killed in the clashes in the village of Katunitsa where local ethnic Bulgarians have been pitted against a Roma clan.

About 5000 people attended Sunday afternoon the funeral of 19-year-old Angel Petrov, who was ran over by a bus driven by associates of local Roma boss Kiril Rashkov, aka Tsar Kiro, late Friday.

Those who came to the funeral included about 1 000 Bulgarian bikers from around the country.

Before the funeral, about 500 people rallied on the Unification square in Plovdiv to honor the memory of Angel Petrov, and, a friend of his, a 16-year-old boy with a heart surgery, who died on Saturday during the protests in Katunitsa against the Rashkov clan as a result of a heart failure.

A number of NGOs and civic associations have taken part in the rallies, demanding that those responsible for the death of the two boys be punished, and that the conflict in Katunitsa has not resulted from ethnic tensions but from the fact that corrupt authorities have protected criminal bosses, apparently referring to the clan of Roma baron Kiril Rashkov.

Rashkov, called "tsar" because of his wealth, is rumored to have acquired his riches by producing illegally fake alcohol in the past 20 years, and by running several prostitution and pickpocketing rings in Europe. None of these reports have been confirmed by the police.

The procession for the funeral of 19-year-old Angel Petrov was heavily guarded by gendarmerie and police forces.

The latest demonstration with demands to deport from Katunitsa notorious Roma Boss, Kiril Rashkov AKA Tsar Kiro, and his family, started in the village Sunday afternoon.

Tensions in the area began after Rashkov's grandson went to the Roma district of Stolipinovo to invite 10-15 people to mark the anniversary of his father and Rashkov son's death. Upon the arrival of three vehicles with Stolipinovo Roma in Katunitsa, a conflict erupted between Tsar Kiro's grandson and a local ethnic Bulgarian, which, allegedly, prompted the Roma driver to run over a 19-year-old boy while the latter was walking his dog. Angel Petrov was dragged by the van for several meters and later died in the hospital.

The tensions escalated further Saturday morning after a meeting with Plovdiv Police Chief Todor Chonov when local ethnic Bulgarians demanded the deportation of Rashkov's family from the village, claiming the authorities have been protecting the criminal clan for years. After the meeting the crowd went to attack the family properties once again – breaking glass and overturning Rashkov's vehicles.

After some 200 football hooligans stormed and torched the estates of the Rashkov clan in Katunitsa Saturday night, and 127 were detained by the police, the locals expect additional tensions Sunday night.