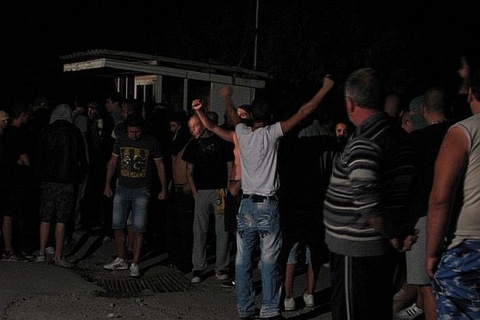 Bulgarian football fans attacked the property of Roma boss Tsar Kiro and his family in the village of Katunitsa, near Plovdiv, amidst escalating ethnic tensions. Photo by BGNES

The deportation of the family of the notorious Roma boss, Kiril Rashkov aka Tsar Kiro, from the village of Katunitsa, will be extremely difficult to realize, according to the Bulgarian police.

The statement has been made Sunday, during a special press conference in the second largest city of Plovdiv and was addressed to representatives of the initiative committee from the village who are demanding the deportation.

During the meeting, which was held in the building of the Plovdiv Regional Police Directorate, the Interior Ministry and the Prosecutor's Office made the commitment to establish the source of all real estate properties and assets of Rashkov and his family.

Georgiev is quoted telling the participants from the initiative committee that no one can be deported in the 21st century without sound proof they have committed a crime, adding there is currently no such evidence about the Rashkov family. He also informed that 3 policemen have been injured since the beginning of the clashes.

"In this case the law was quickly reinforced. We are going to probe the traffic incident to establish if this had been a purposeful act or simply an accident. Police apprehended the perpetrator, but also arrested the arsonists, meaning we treat everyone equally," the Chief Commissar concluded.

Georgiev, who is on the spot and spent the night in Katunitsa, announced earlier Sunday that the driver of the van, which run over and killed 19-year-old Angel Petrov from Katunitsa, near Plovdiv, has been arrested by the police.

The man had briefly left the country and was detained immediately after his return. He was issued a country-wide search warrant Friday night when a van, transporting Roma from the Stolipinovo district in Plovdiv, ran over the 19-year-old ethnic Bulgarian boy in Katunitsa around 8 pm. The driver, 55, with the initials C.Y., has a long rap sheet.

Tensions in the area began after the grandson of the notorious Roma boss and Katunitsa resident, Kiril Rashkov aka Tsar Kiro, went to the Roma district of Stolipinovo to invite 10-15 people to mark the anniversary of his father and Rashkov son's death. Upon the arrival of three vehicles with Stolipinovo Roma in Katunitsa, a conflict erupted between Tsar Kiro's grandson and a local ethnic Bulgarian, which, allegedly, prompted the Roma driver to run over the 19-year-old boy while the latter was walking his dog. Angel had been dragged by the van for several meters and later died in the hospital.

The tensions escalated further Saturday morning after a meeting with Plovdiv Police Chief Todor Chonov when local ethnic Bulgarians demanded the deportation of Rashkov's family from the village, claiming the authorities have been protecting the criminal clan for years. After the meeting the crowd went to attack the family properties once again – breaking glass and overturning Rashkov's vehicles.

Another 127 people were arrested Saturday evening, after football hooligans flocked to the village, storming and setting on fire Tsar Kiro's properties, the press center of the Interior Ministry informs Sunday.

Some 2 000 soccer hooligans from the fan clubs of Lokomotiv Plovdiv FC, Botev Plovdiv FC, joined later by fans from Sofia's CSKA and Levski football clubs and football fans from the southern city of Stara Zagora, took part in attack on three homes owned by the clan of the Roma boss.

The hooligans' outburst started at about 8 pm Saturday night, and was over by 10 pm, as one of Tsar Kiro's homes was essentially destroyed. There were no reported injuries.

The hundreds of police and gendarmerie officers brought to Katunitsa adopted a hands-off policy and abstained from tackling the arsonists, but it was reported by the TV channel bTV Sunday that the main mansion of the family has remained intact.

According to Kalin Georgiev, the policy aimed at avoiding a further escalation of tensions, and potential casualties if the police clashed with the hooligans.

The major job of the gendarmerie instead has been to secure the spots for the firefighters who arrived shortly to tackle the numerous blazes set by the hooligans.

Most of the attackers were wearing masks and wigs. 230 police and gendarmerie officers from Plovdiv, Smolyan, Stara Zagora, and Pazardzhik occupied the entire village of Katunitsa for the night.

Tensions could escalate further on Sunday when the funeral of the murdered 19-year-old Bulgarian boy will take place.

The members of the Rashkov clan have been evacuated by 20 policemen, who escorted them away from the village, immediately after the incident with the van. Interior Secretary Georgiev has refused to reveal their location for safety reasons. Tsar Kiro, however, declared in a phone interview for bTV Sunday morning that he remains in his mansion in Katunitsa, unwavering he would never evacuate.

The Plovdiv Regional Prosecutor, Ivan Daskalov, was also on the spot, to decide on the indictment of those arrested – charges will include vandalism, hooliganism, arson, demolition of property. Strong police presence is to remain in Katunitsa.

Interethnic tensions have been simmering in Katunitsa for years, with locals complaining of Tsar Kiro and members of his family exercising a self-styled rule over the community, with authorities doing little or nothing to curb it.

Meanwhile, also on Sunday, Interior Minister, Tsvetan Tsvetanov, stressed that all politicians in Bulgaria are monitoring the situation closely due to its importance for the ethnic peace. Tsvetanov explained that 29 of the 127 individuals arrested Saturday evening will be tried under the speedy procedure and pointed out the importance of preventive measures the police will undertake to not allow any further incidents and ethnic conflicts.