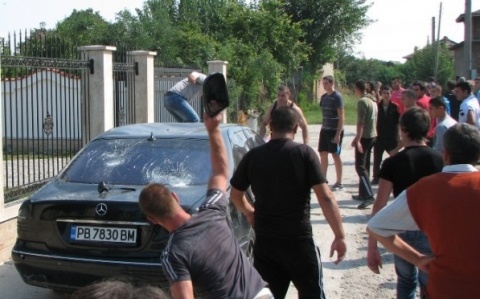 Ethnic Bulgarians have smashed cars and burned property of the Roma Rashkov clan in Katuntsi. Photo by Podtepeto.com

Bulgarian PM Boyko Borisov has issued a statement calling for non-politicization of the recent case of interethnic violence in the Plovdiv village of Katunitsa.

Friday and Saturday tensions between ethnic Bulgarians and a Roma clan in Katunitsa escalated when a Bulgarian youth was killed, residents believe intentionally, by a van driven by Roma people.

Bulgarians then went on to vandalize the property of notorious Roma leader Kiril Rashkov, aka Tsar Kiro, which led to some 200 riot police being deployed in Katunitsa.

Saturday PM Borisov said he is keeping close track of the events and has dispatched Ministry of Interior Chief Secretary Kalin Georgiev on the site to manage the crisis.

He emphasized that the Bulgarian government will take care of the safety of every Bulgarian citizen, and will bring perpetrators to justice, no matter their ethnicity.

Nationalist political parties Ataka and VMRO have already denounced what they see as the state's undue toleration of "Roma crimes" and have vowed to act out.