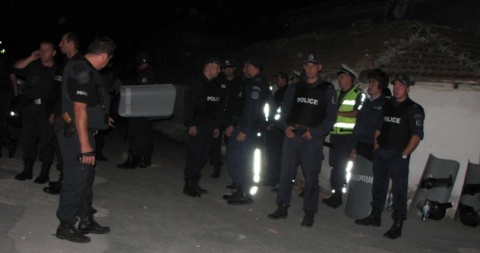 6 persons, including 3 police officers, have been injured, in addition to the person killed in inter-ethnic riots between Bulgarians and Roma that erupted in the Bulgarian village of Katunitsa Friday and Saturday.

Friday night a 19-year-old ethnic Bulgarian was purposefully run over and killed by a van driven by Roma, after which angry Bulgarians gathered around the houses of notorious clan leader Kiril Rashkov, aka Tsar Kiro.

A car driven by Roma drove into the crowd, injuring 5 persons, including three of the police officers who had arrived at the scene.

Hundreds of riot police were mobilized after angry crowds started vandalizing the property of the Tsar Kiro family.

Protesters have assembled around the Tsar Kiro houses Saturday, requesting the evokation of the entire family from the village. One more person has suffered health problems in the tumult.

Police have arrested 6 persons of Roma ethnicity, who were in the cars that caused the death and injuries. The people detained come from the Stolipinovo neighborhood in the nearby city of Plovdiv.

The driver of the killer van has not been identified and an arrest warrant has been issued.