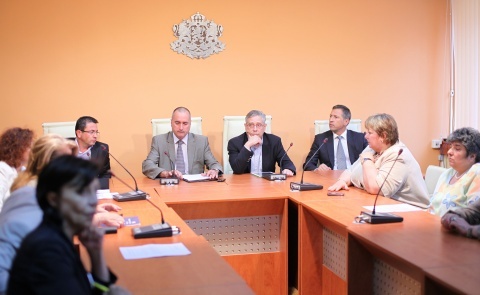 An emergency briefing was held Tuesday to solve the problems created by debt-ridden tour operator Alma Tour. Photo by BGNES

Bulgarian tour operator Astral Holidays has undertaken a commitment to help bring Bulgarian tourists stuck in Turkey's Antalya and on the Greek island of Crete to get to the airports for their flights home.

The return flights for the stranded Bulgarians, who bought holiday packages from scandal-hit bankrupt company Alma Tour, have been organized and guaranteed, according to an announcement of the Commission for Consumer Protection (KZP).

To get access to the service, the tourists need to get in touch with representatives of Astral Holidays on the territory of the two resorts and to give their names, current location and telephone numbers.

Astral Holidays appoligizes in advance that the organized transportation service to the airports will be provided against payment but notes that the fares will be minimal.

The passengers will be issued documents which they can use to claim their money back from the insurer.

The news about the stranded groups of Bulgarian tourists broke Wednesday, when a Bulgarian mass-circulation daily reported that a total of 183 Bulgarian customers of Alma Tour spending their holidays in Turkey's Antalya and on the Greek island of Crete, would be flown home Saturday on planes of Bulgaria Air, although the tour operator had not paid for the service.

Problems with Alma Tour surfaced on 09 September, when close to 1,000 international tourists, most of them Russians, were stranded at Bulgarian Black Sea airports of Burgas and Varna.

Their flights were canceled by Bulgaria Air over what it claimed to be EUR 3.6 M debts from Alma Tour, which had booked the tourists' trips.

Insurance company Armeetz said Wednesday that it was ready to accept refund claims from customers of Alma Tour which went out of business for an indefinite period Tuesday.

Armeetz reminded that Alma Tour's activity was insured for the sum of BGN 200 000.

The total number of people whose trips were cancelled is yet unclear, but unconfirmed reports put the figure at 2500.

If the sum of BGN 200 000 is not enough to cover all refund claims, the rest of the scammed tourists will have to seek their money from Alma Tour in court.