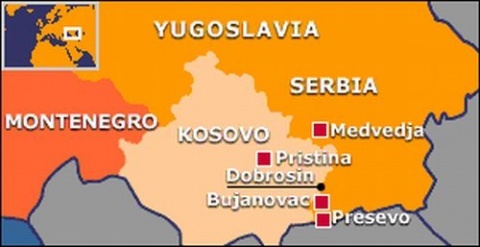 Presevo is located in the very southeast of Serbia near the Kosovo border. Map by BBC

Tensions in Southeastern Serbia have grown after several thousand ethnic Albanians rallied to protest against discrimination in the town of Presevo.

The demonstrators carried Albanian, US, and EU flags, and vast banners with their demands for the Serbian state authorities – the right to use their mother tongue, right of labor, and right to work at the state institutions in Serbia.

"Stop Discrimination. Enough, It Will Be Too Late Tomorrow!" read some of the banners written in Albanian and Serbian.

Wednesday's demonstration is a follow-up of a rally organized in Bujanovac on September 13 that demanded the use of Albanian language by the administration and the recognition of diplomas acquired from the ethnic Albanian university in Kosovo's capital Prishtina.

Presevo, Bujanovac, and Medveda are municipalities bordering Kosovo, the ethnic Albanian republic which declared independence in 2008.

The Liberation Army of Pre?evo, Medve?a and Bujanovac even has a Facebook fan page, and four fan as of September 21, 2011.

In 2010, a poll found that a majority of the ethnic Albanians in Albania, Kosovo, and Macedonia were in favor of a "Greater Albania."