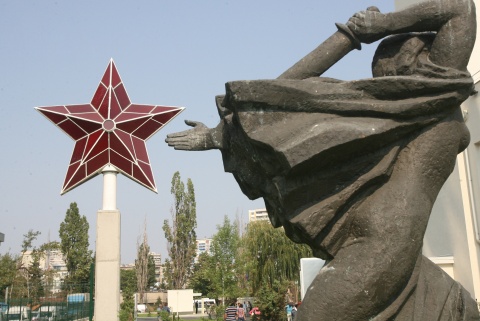 Bulgaria's Museum of Socialist Art is now open for visitors. The general admission fee is BGN 6. Photo by BGNES

"We have combed through every basement of every town. Socialism is not an invention of artists, but of politics, but the museum shows true mastery", Minister Rashidov proudly declared.

"A people that does not build museums, churches and roads has no way of going down in history", he pointed out, adding that "After all, there must be a way leading to the museums and the churches".

The second to give a speech in the course of the ceremony was Simeon Djankov, who said that he had paid no less than 50 visits to the museum while it was being built.

"I came and watched construction unfold. I took my two boys with me to show them how a museum gets built and to tell them about the people whose sculptures are here", the Finance Minister announced, predicting that the site would turn into one of the biggest tourist attractions in Sofia.

He further declared that the opening of the museum closed a page in history, sending communism/ socialism into the museum.

Speaking after Djankov, Prime Minister Borisov drew attention to the substantial investments the government made in culture amid a severe financial crisis.

"Two days ago, we opened the renovated Eski Mosque in Stara Zagora. I would recommend that everyone go and see it", Borisov stressed.

He also said that the ministry would be allocated an extra BGN 75 M apart from the budget "for the construction of museums and for archeology", as well as a reserve of BGN 15 M.

Bulgaria's Prime Minister further informed that the historic Buzludzha Monument would be returned to the Bulgarian Socialist Party (BSP) on September 28.

"We shall let them take care of it because here it also holds true that a party which does not respect its past and its symbols has no future", Borisov stated.

Buzludzha, a peak on the Stara Planina mountain range, is a landmark site for Bulgaria's left-wing because the foundations of the Socialist Movement in Bulgaria were laid there at a meeting of free-thinking intellectuals in 1891.

The Museum of Socialist Art, an affiliate of the National Arts Gallery, has on display over 150 items created during Socialist times between 1944 and 1989, and is adorned with portraits and statues of Communist leaders such as Lenin and Stalin, and of paintings glorifying the working class.

The museum has a video hall where documentaries from the times of the Socialist regime will be showed. There is a souvenir shop as well.

The museum is located across the building of the Sofia Traffic Police headquarters on 7 "Lachezar Stanchev" street .

Its construction came in at BGN 3.5 M channeled from the budget of the Culture Ministry.

The Museum has already stirred a controversy in Bulgaria, dividing the nation into vocal supporters and adamant opponents.