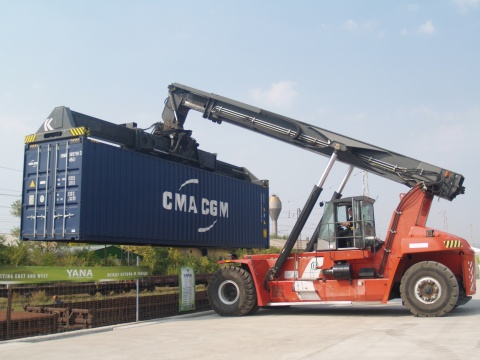 Pictured: the unloading of the first containers ever to arrive in Bulgaria on unit train at the Yana train station in Sofia. Photo by Transport Ministry

The first ever container block train, also known as a unit train, has been received at the new intermodal transport terminal in Bulgaria's capital Sofia.

Bulgaria's Transport Ministry is going to grant all-our support to the use of container block trains, or unit trains, in the country, according to Deputy Minister of Transport and IT Kamen Kichev.

"These type of transport services such as the container block trains are the future. They will receive the necessary support from the Transport and IT Ministry because the smaller amount of freight is transported by road, the smaller the harm to the environment in Bulgaria," Kichev said Saturday at the Yana train station in Sofia, as cited by the ministry press service.

The Deputy Minister took part in the formal welcome of the container block train at the intermodal transport terminal at the Yana train station in Sofia.

Until now, container block trains had only passed through Bulgaria but had never been used on Bulgarian territory because of the lack of intermodal transport terminals with sufficient capacity.

A unit train, also called a block train, is train in which all the freight cars are shipped from the same origin to the same destination, without being split up or stored en route, a practice that saves time and money.

With the arrival of the first ever container block train in Bulgaria, the country formally becomes part of the European network of intermodal terminals connecting Lyon in France with Istanbul in Turkey, the Transport Ministry said.

The arrival of the first container block train at the Yana station in Sofia is the result of a joint project between the state-owned company BDZ Freight Services EOOD and a private firm, Ecologistics EOOD, for the creation of a new transport service – transportation from Ljubljana to Sofia by unit train with 40-feet containers.

By the end of 2011, the Yana railway station will process about 400 containers delivered by unit trains from the Adriatic port of Koper, Slovenia, which means that each week one container block train will travel from Ljubljana to Sofia.

The full capacity of the intermodal transport terminal at Yana will be achieved gradually, after the firms in charge of the project conclude their talks with six more intermodal operators for the processing of regular container unit trains, the Transport Ministry announced.

The Bulgarian government has recently confirmed the intention of the Transport Ministry to go for the privatization of BDZ Freight Services, first announced in August 2011.

The freight services of the Bulgarian state railways BDZ have traditionally been its more profitable unit, and past governments have used freight revenues to cover mounting deficits in the passenger services.