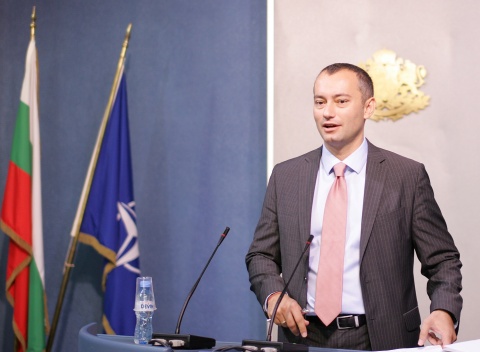 Bulgaria's Foreign Minister Nikolay Mladenov spoke in Sofia Saturday in reaction to the Dutch declaration of a veto on Bulgaria's Schengen entry. Photo by BGNES

Bulgaria will reconsider its support for the reforms of the Schengen Agreement if it decides it is getting unfair treatment over its application for the visa-free area, Foreign Minister Nikolay Mladenov announced in Sofia.

The reaction of the Bulgarian government came after Friday night the Dutch government decided that the Netherlands will veto Bulgaria and Romania's accession to the Schengen Area at the meeting of the Council of the European Union on September 22, 2011.

What is more, the Dutch Cabinet made it clear it would oppose the taking of any final decision on the Schengen bid of the two Balkan countries before 2012.

According to Mladenov, the decision of the Netherlands ignores the fact that Bulgaria and Romania have met the criteria for Schengen Area membership.

"If a prudent decision that meets the interests of everybody in Europe, and especially the interests of the Bulgarian people is made on September 22, Bulgaria will support the reform of the EU legislation on the Schengen Area," Bulgaria's top diplomat said.

"If, however, such decision is not made, we will have to discuss very carefully our entire policy from here on with respect to the support that we are granting for the Schengen reform," he warned.

Mladenov criticized the opposition of Western European countries such as the Netherlands, Germany, Denmark, Sweden, and Finland to Bulgaria's Schengen entry in a subtle way by declaring that "rules are written in order to be obeyed."

He further stressed that Europe's greatest problem at present – the fact that there is a financial and economic crisis in the EU – stems from the failure to obey rules.

"Bulgaria is a state which abides by the rules, and it has proven that – when it comes to border control, fiscal discipline, cooperation with our partners. All that cooperation and goodwill coming from us is based on the understanding that we need to protect the interests of the Bulgarian citizens in a European way that includes and accounts for the views of other nations," the Bulgarian Foreign Minister declared.

Mladenov criticized the decision of the Dutch government to veto Bulgaria and Romania's Schengen accession but stressing that the European Commission and the member states themselves, the Netherlands included, have recognized that the two Balkan countries have met the Schengen membership criteria.

“Yesterday's decision apparently has to do with the domestic political differences in the ruling coalition in the Netherlands,” Bulgaria's top diplomat says, noting further that the decision in question ignores the perfect level of cooperation between Bulgaria and the Netherlands in the field of law enforcement, which is key to crime prevention and tackling.

He described the Dutch Cabinet's position as one of a “rejection of dialogue,” which, in his words, is “unfathomable."

The Bulgarian Foreign Minister went on to declare that the Bulgarian citizens are not “second-hand” citizens of the EU, and neither is Bulgaria's EU membership, and that the Dutch veto on Bulgaria's Schengen aspirations violates the practice of seeking a consensus in the EU.

In his words, Bulgaria hopes that the 25 Schengen member states will take into account the initiatives of the Polish EU Presidency, and that these can become the basis of a consensus.

In the recent months, Poland has suggested that Bulgaria and Romania could be granted a two-phased accession to Schengen by achieving full memberships gradually.

“I hope that all countries in Europe will account not only for the intentions but also for the achievements. Bulgaria's participation in the Schengen Area and the Schengen Information System will only serve to strengthen Europe's security. If Bulgaria continues to be left out of the Area, this will increase the risks for its members. It is in the best interest of everybody to work together on securing the EU borders,” Mladenov said.

After failing to join the Schengen Area by March 2011, Bulgaria and Romania have been awaiting the meeting of the Council of the EU on September 22 to receive a decision on their Schengen fate.

The EU's latest members Bulgaria and Romania, who joined in 2007, have had their Schengen accession blocked by a number of older member states, such as EU juggernauts France and Germany.

Dutch Minister for Immigration and Asylum Gerd Leers was quoted as saying Friday that the Netherlands is against any decision on the joining of the Bulgaria and Romania to Schengen before 2012.

Speaking to the Dutch Parliament Thursday evening, Leers already stated the Netherlands will "work against" Bulgaria and Romania joining the Scdhengen Agreement. Neither of the two Balkan countries is doing enough to combat corruption, Leers told the Dutch Parliament, pointing out this is a fact confirmed by a European Commission report this summer.

"Bulgaria and Romania have met the technical criteria for Schengen membership. Unfortunately, the issue has been politicized," His Excellency Leszek Hensel, Ambassador of Poland to Bulgaria, has told Novinite.com (Sofia News Agency) in an exclusive interview. He added that the decision about Bulgaria and Romania's accession to the Schengen Area would be shaped precisely during the Polish EU Presidency in September 2011.