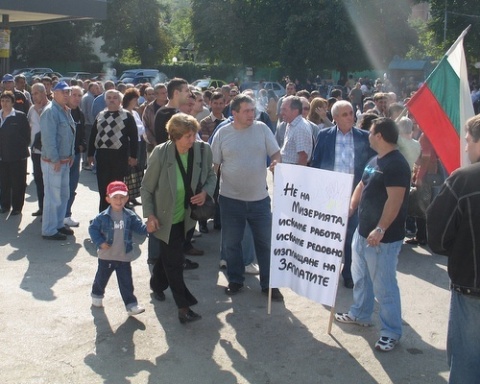 Bulgaria's railway syndicates have announced they plan a strike in early October 2011 over a number of issues, including the news that a badly needed World Bank loan for state railway company BDZ has fallen through.

"We have no dialogue whatsoever with the management of BDZ and the Transport Ministry," Petar Bunev, head of the railway syndicate a the Confederation of Independent Bulgarian Syndicates (KNSB) told Darik Radio Saturday.

The major grievances of the railway unionists and laborers include the failed negotiations with the government for the signing of a new collective labor contract, the refusal of the World Bank to grant a massive loan for BDZ, and what is said to be measures on part of the government to implement massive layoffs from the railways in the near future.

Bunev made it clear that the syndicates have started to circulate a statement asking for signatures in order to check how many of the railway workers are ready to go on strike.

"The people will revolt in order to save their jobs and their bread," the unionist declared.

In his words, the entire railway system in Bulgaria is "in panic" as some 2000 people are to be laid off from BDZ Passenger Services and BDZ Freight Services.

"All of that is happening in a moment when a collective labor contract is missing, and the government doesn't want to make a new contract, and doesn't even wish to negotiate," he declared.

The railway unions' strike announcement comes a day after BDZ CEO Yordan Nedev announced that the World Bank has refused for the time being to a grant a life-and-death restructuring loan for the Bulgarian State Railways BDZ.

Nedev explained Friday that the ailing Bulgarian railways need to demonstrate much better management in order to hope they can get the long-discussed loan.

According to Nedev, the end of 2011 the state company can make about BGN 10-13 M by ridding itself of outdated assets such as railway cars, spare parts, etc.