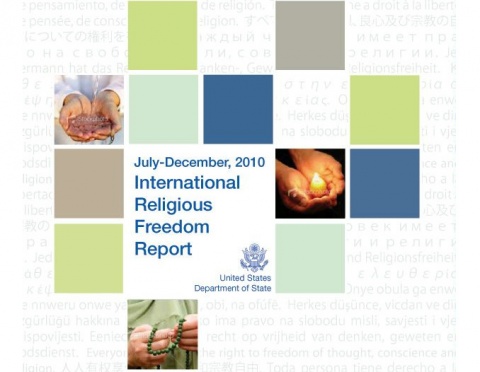 This is a reprint of the full text of the section on Bulgaia of the US State Deparment report on International Religious Freedom for the period July-December 2010. The entire report can be found HERE

The new US State Department report on religious freedom around the world was released September 13, 2011. The Annual Report has historically covered a reporting period from July 1of one year through June 30 of the following year. The current Report, however, covers a six-month period from July 1, 2010, through December 31, 2010, because the Department of State is shifting to a calendar year reporting period. The Department of State submits the report to the US Congress.

US Department of State

The constitution and other laws and policies protect religious freedom and, in practice, the government generally enforced these protections. However, the constitution designates Eastern Orthodox Christianity as the "traditional" religion, exempting it from having to register in court as required for all other religious groups.

The government generally respected religious freedom in law and in practice; however, it did not enforce legal and policy protections of religious freedom consistently. There were some concerns that the government did not proactively intervene to prevent societal abuses. There also were continuing reports of intolerance from police and local authorities during the reporting period.

There were reports of societal abuses or discrimination based on religious affiliation, belief, or practice. Discrimination, harassment, and general public intolerance of some religious groups remained an intermittent problem. There was an increasing number of anti-Semitic incidents and vandalism against mosques.

The U.S. government discusses religious freedom with the government as part of its overall policy to promote human rights.

The country has an area of 42,855 square miles and a population of 7.6 million. Eighty-five percent of the population identifies itself as Orthodox Christian. Orthodox Christianity, Hanafi Sunni Islam, Judaism, and Roman Catholicism are generally understood as holding a historical place in the country's culture. Muslims comprise the largest minority, estimated at 13 percent. Groups that in total constitute less than 5 percent of the population include Catholics, Armenian Christians, Jews, evangelical Protestants, and others. There are 107 registered religious groups in addition to the Bulgarian Orthodox Church (BOC).

Some religious minorities are concentrated geographically. The Rhodope Mountains (along the country's southern border with Greece) are home to many Muslims, including ethnic Turks, Roma, and "Pomaks" (descendants of Slavic Bulgarians who converted to Islam under Ottoman rule). Ethnic Turkish and Roma Muslims also live in large numbers in the northeast and along the Black Sea coast. More than half the country's Catholics are located in and around Plovdiv. The majority of the small Jewish community lives in Sofia, Rousse, and along the Black Sea coast. Protestants are more widely dispersed throughout the country but are more numerous in areas with large Roma populations.

Please refer to Appendix C in the Country Reports on Human Rights Practices for the status of the government's acceptance of international legal standards http://www.state.gov/g/drl/rls/hrrpt/2010/appendices/index.htm.

The 2002 Denominations Act allows only private religious exercise if members of the religious community are the only persons present, and public religious observance if the observance is also open to persons not belonging to that group.

The constitution stipulates that Eastern Orthodox Christianity, represented by the BOC, is the traditional religion. The 2002 Denominations Act designates the Metropolitan of Sofia as the BOC's patriarch and establishes the BOC as a legal entity, exempting it from court registration mandatory for all other religious groups that wish to acquire national legal recognition. The state budget allocated three million leva (.8 million) for registered religious groups. Of the total, 2.3 million leva (.4 million) was allocated for the BOC, 180,000 leva (3,000) for the Muslim community, 40,000 leva (,000) for the Armenian Apostolic Church, 30,000 leva (,000) for the Jewish community, and 40,000 leva (,000) for other registered denominations.

To receive national legal recognition, denominations applied for official court registration, which was generally granted. The Council of Ministers' Religious Confessions Directorate, formerly responsible for the registration of religious groups, provides "expert opinions" on registration matters upon request of the court. All applicants have the right to appeal negative registration decisions to the court of appeals. The 2002 Denominations Act does not require the formal registration of local denominations, but in the past some municipalities insisted that branches register locally. Some concerns remained that the act does not adequately specify the consequences of failure to register.

The constitution prohibits the formation of political parties along religious lines, but there were concerns that some parties exploited religious problems for political purposes.

Public schools at all levels offer an optional religious education course that covers Christianity and Islam. The course examines the historical, philosophical, and cultural aspects of religion and introduces students to the moral values of different religious groups. All officially registered religious groups can request that their religious beliefs be included in the course's curriculum.

The government does not permit religious headdresses in official photos for national identity documents.

The government generally respected religious freedom in law and in practice; however, it did not enforce legal and policy protections of religious freedom consistently. There were allegations that authorities persecuted Muslims under the guise of preventing radical Islam.

Mustafa Hadji and Nedim Gendzhev continued their longstanding dispute over the Office of Chief Mufti of the Muslim community during the reporting period. Mustafa Hadji continued to act as the de facto chief mufti. Prime Minister Boyko Borissov met with representatives of both contenders in September and encouraged them to resolve their differences in a prompt and peaceful way. This led to the establishment of a four-point framework to resolve the leadership dispute. However, after agreeing on the framework, neither party appeared willing to compromise.

Some nontraditional groups continued to face discrimination and prejudice from local authorities in certain localities, despite obtaining national registration from the Sofia City Court. Article 19 of the 2002 Denominations Act states that nationally registered religious groups may have local branches. The law requires notification; however, some municipalities claimed that it requires formal local registration.

Contrary to the law, some municipalities restricted certain forms of proselytizing and prohibited the distribution of religious literature, even by groups that were registered locally. There were continuing reports of restrictions being enforced in Burgas, Haskovo, Varna, Rousse, and Pleven. The Directorate for Religious Affairs stated both local governments and uniformed police were unfamiliar with the provisions of the 2002 act and needed training.

Both Jehovah's Witnesses and the Muslim community continued to report problems obtaining construction permits for new prayer houses and mosques.

There were no indications that the government discriminated against members of any religious group in restituting properties nationalized during the communist period. The statute of limitation for restitution cases was extended until 2013 to ensure religious groups have enough time to file claims.

The BOC, Muslim and Jewish communities, and several Protestant denominations complained that some of their confiscated properties had not been returned.

In May 2009, following a decade-long court battle, the Jewish community regained possession of a central Sofia building used for many years as a state hospital. The court decided in favor of the Jewish community despite the opposition of hospital management. The Ministry of Regional Development and Public Works subsequently appealed the ruling. The appeal was pending at the end of the reporting period.

The Jewish organization Chabad was denied registration as a religious group due to Ministry of Health regulations which require all circumcisions be performed by medical doctors.

In January 2009 the European Court of Human Rights (ECHR) ruled that the government had violated the religious rights of members of the Alternative Orthodox Synod (AOS) when it expelled them from their parishes and gave the parishes to the BOC. The ECHR advised the parties to negotiate mutually agreeable compensation for damages, but the government appealed the ruling, since the BOC leadership refused to negotiate with the AOS claimants, because of their refusal to apologize for what the BOC viewed as illegal occupation of church property and false representation of the denomination. In June 2009 the ECHR Grand Chamber rejected the government's appeal, and on September 16, the court granted the AOS claimants pecuniary compensation.

There were reports of abuses of religious freedom in the country. The spokesman for the Office of the Chief Mufti complained of increased repression by the government, including unwarranted arrests intended to intimidate Muslim leaders.

For example, a local mufti was arrested in Sofia in October, when he failed to appear in court to testify in a case concerning the falsification of the registered by-laws of the Muslim denomination because he had not been properly served with a notice to appear.

On October 6, law enforcement and security forces raided the homes of imams and offices in the regions of Smolyan, Pazardzhik, and Blagoevgrad. They seized Islamic literature and financial documents that they considered to be related to activities of an illegal branch of the Islamist organization Al Waqf Al Islami. According to the government's official press release, the organization was seeking to provoke religious hatred and called for undermining the constitutional order. The office of Mustafa Hadji responded that none of the persons involved espoused extremist ideals. No arrests were made; an investigation continued at year's end.

There were no reports of religious prisoners or detainees in the country.

There were reports of societal abuses or discrimination based on religious affiliation, belief, or practice.

Relations between religious groups generally remained civil and tolerant; however, discrimination, harassment, and public intolerance of some religious groups remained intermittent problems. There were continuing reports of societal discrimination against "nontraditional" religious groups. Jehovah's Witnesses continued to report numerous print and broadcast media stories, including by political parties and education officials, with derogatory and sometimes slanderous allegations about their activities and beliefs. The Church of Jesus Christ of Latter-day Saints (Mormons) voiced concerns over the media's reluctance to cover their charity work and positive contributions to society. Although less frequently than in previous years, some Protestant groups continued to report hostility and verbal attacks from the local population in heavily Muslim areas.

The Jewish community expressed concern over the lack of public reaction to anti-Semitic incidents. The number of such incidents had increased, according to Shalom, an organization of Jews in the country.

The Muslim community continued to report numerous cases of mosque desecration. For example, on August 23, vandals broke the windows on the front door of the regional mufti's office in Rousse, and on August 26, the mosque in Shoumen was painted with threats and a swastika. The detailed report on anti-Muslim incidents in the last three years with guidelines for better cooperation between police and the community at the local level, promised by the Ministry of Interior in May, had not been released.

Embassy officers met with Orthodox leaders, senior and local Muslim leaders, religious and lay leaders of the Jewish community, and leaders of numerous Protestant and "nontraditional" denominations to discuss religious freedom in the country. Embassy officers also met with various government entities regarding the restitution of Jewish property, Islamic extremism, and the Muslim leadership dispute.