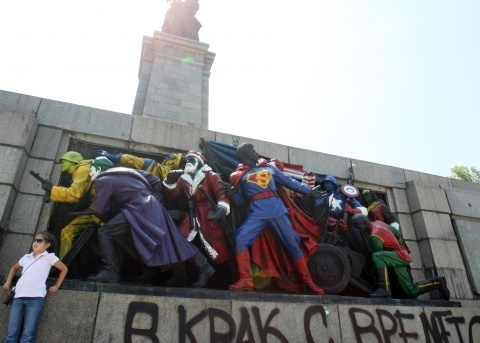 Sofia's Soviet Army monument was painted by unknown street artists to represent a set of US pop culture characters. Photo by BGNES

The group of street artists that painted the bronze figures of Soviet soldiers in downtown Sofia to represent various US pop culture characters has spoken out for the first time.

A total of nine street artists participated in the makeover of the figures that turned them into The Joker, Wolverine, Santa, Superman, Ronald McDonald, Captain America, Robin, and Wonder Woman, among others on June 18, it has been revealed.

The controversial work of art was initially attributed to a single artist, who was quickly called "The Bulgarian Banksy" by Western media. As it turned out, it was the work of a group that has chosen to name itself "Creative Destruction".

The Soviet flag waved by the soldiers was painted to become a US flag, while a big inscription added by the artist below the soldier statues said, "Rolling with the time". The monument was cleaned overnight Tuesday by the forum "Bulgaria-Russia," hours before the time officially announced for the media.

In their first interview, the street artists, who still remain anonymous, have explained their actions with what they perceive as the constant swinging of Bulgaria's political orientation.

"While the Soviet Union was in power, Bulgarians tried to be the best communists. Now, when we are living in democracy, we are trying to be Americans," a representative of the group has explained, as cited by the One magazine.

The artists have further declared they are against the popular opinion that the Soviet Army monument should be destructed and that they did not mean to vandalize it. However, they have pointed out that it no longer represents the Soviet army as it once used to, adding that the area around it is now a gathering place for Sofia's subculture, including young artists. The group's members are aged between 17 and 21.