Chuck Norris, Willis, Schwarzenegger Confirmed for 'The Expendables 2' in Bulgaria 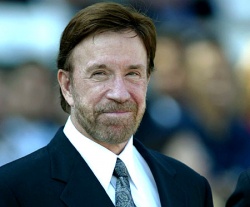 Legendary movie tough guy Chuck Norris is among the stars confirmed for the new movie. File photo by Getty Images

Jean Claude Van Damme, Bruce Willis, Arnold Schwarzenegger and the one and only Chuck Norris are among the cult old-school action stars confirmed for "The Expendables 2", which is to be shot in Bulgaria within weeks, Sylvester Stallone has revealed.

Stalone has also hinted that Nickolas Cage may be involved in the much-awaited sequel:

"We've got Chuck Norris and I think Nic Cage. We're trying to work out different scenarios. I like using people that had a moment and then maybe have fallen on some hard times and give them another shot. So we're always looking for actors like Michael Biehn and Michael Pare. I like those kinds of guys. Someone did it for me and I like to see if I can do it for them. We also need some new blood in there, a Navy Seal-type, because with the Expendables none of them have 20-20 vision anymore. They need some help, man," the legendary action star has told the Entertainment Weekly.

"We'll have a big showdown between me and Van Damme, which has been anticipated for a long time, so it should be a good one." Sly has also announced.

It was Sylvester Stallone that wrote and directed the first movie, but Simon West (Con Air, The Mechanic) is taking over the director's chair for the sequel. The release date of "The Expendables 2" is set for August of 2012.