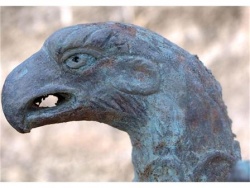 A Bulgarian archeological team discovered unique ornaments from the chariot of a wealthy Thracian woman, which are in the form of eagle heads. Photo by 24 Chassa.

The archeological team, led by Daniela Agre, has discovered a treasure during digs at a Thracian mound near the southern village of Borisovo, in the vicinity of the town of Elhovo.

The precious items were placed in the tomb of a wealthy Thracian woman and are from the end of the 1st – beginning of the 2nd century AD, the Bulgarian 24 Chassa (24 Hours) daily.

They include a set of luxury bronze dishes, a large round plate and a caldron, all decorated with ivy leaves. There is also a vessel, looking like a small bucket with a lid, which the archeologists say has no analogue in finds in Bulgaria, and a bronze box for toiletries with incrusted bronze busts of satyrs.

The team, however, is the most enthusiastic about another discovery, according to 24 Chassa – a set of ornaments from the chariot of the buried woman. Illegal treasure hunters have dug and nearly destroyed the chariot, but were unable to find the ornaments, which had, actually, been their goal.

"This happened because before the funeral the ornaments had been removed and hidden. The ancient people obviously knew that even then the tombs faced the danger of being robbed. This is why we have this precious find today," Agre is quoted saying.

The ornaments include four eagles whose wings transform into dragon heads.

Near the tomb, the team also found a large square table where the Thracians placed food for the deceased as part of the burial ceremony – Agre says this is also an exceptional discovery because it is evidence this had been a tomb from Roman Thrace.

In 2008, the same team discovered in the southeastern village of Borilovo, in the Strandzha Mountain, an early Thracian tomb from the 4th century B.C., evaluated as an unheard of for this period expensive structure.