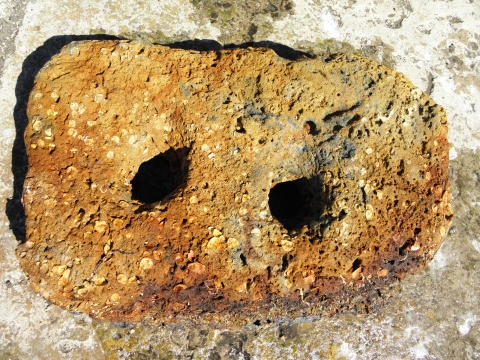 The 200-kg beautifully ornamented anchors have two holes in them – one for the anchor rope and another one for a wooden stick. Photo by BNGES

Massive ancient stone anchors were found by divers participating in an archaeological expedition near the southern Bulgarian Black Sea town of Sozopol.

The 200-kg beautifully ornamented anchors have two holes in them – one for the anchor rope and another one for a wooden stick. They were used for 150-200-ton ships that transported mainly wheat, but also dried and salted fish, skins, timber and metals from what now is Bulgaria's coast.

The anchors' shape suggests they were used by Creto-Mycanaean, Phoenician or Carian sailors in the 15th-12th centuries BC, which would refute the hypothesis that Greeks were the first Black Sea sailors starting the 12th century BC, the BGNES news agency points out.

The anchors are also said to show that the Trojan war may have started because of excise duties imposed by the Trojans, who took advantage of their control over the Dardanelles – and not because of Helen of Troj.

Last summer's remarkable archeological discovery of what is believed to be St. John the Baptist's relics in Sozopol  has attracted huge interest towards the town as a historical center of the country.