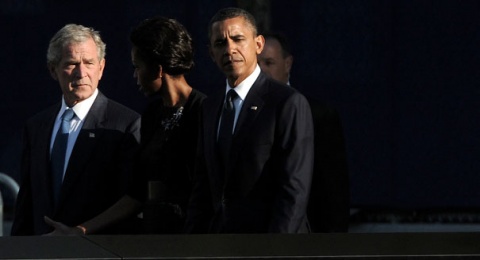 Ten years later, President Barack Obama was joined by his predecessor, George W. Bush, in paying tribute to the victims, their loved ones and the whole nation.

Former President George W. Bush referenced the Civil War, as he spoke to a crowd of victims' families at the 9/11 Memorial on Sunday.

"I pray that our heavenly father may assuage the anguish of your bereavement," Bush read, quoting a letter from President Abraham Lincoln to the mother of soldiers who died in the war between the states.

Lincoln said he knew that his words would be be "weak and fruitless" at a time of such grief, but added that he could not refrain from expressing the "thanks of the Republic they died to save."

President Obama also spoke at Sunday's special ceremony. He opened the ceremony at Ground Zero with a tribute to the thousands who died. He read from Psalms 46: "God is our strength" and "therefore we will not fear."

"The Lord of hosts is with us," Obama said in the solemn ceremony at the new memorial. "The God of Jacob is our refuge."