US Falls into Silence to Honor 9/11 Victims 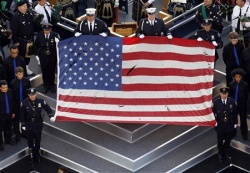 The US has held moments of silence to mark 10 years since planes were crashed into the World Trade Center.

The ceremony at the site in New York paused at the exact time of each impact to remember the dead of a day which saw nearly 3,000 people killed.

US President Barack Obama read from the Bible before relatives began to read out the names of victims.

Obama read a passage from Psalm 46, which speaks of God's refuge and strength, "a very present help in trouble".

Relatives of victims have also gathered in Washington and Pennsylvania, where planes also crashed. As the names of the dead were read out, some of those present wiped away tears.

Hosting the ceremony at the WTC site, New York Mayor Michael Bloomberg said a "perfect blue sky" had turned into "the blackest of nights" on 9/11.

Security measures have been tightened across the country following warnings of a possible al-Qaeda anniversary attack.

An official memorial is to be unveiled at the site whose twin towers were destroyed in the attacks. New York's National September 11 Memorial features two reflecting pools, each almost an acre in size, in the footprints of the twin towers.

Metal barriers have been erected on nearby roads, while police in New York and Washington are stopping and searching large vehicles entering bridges and tunnels.