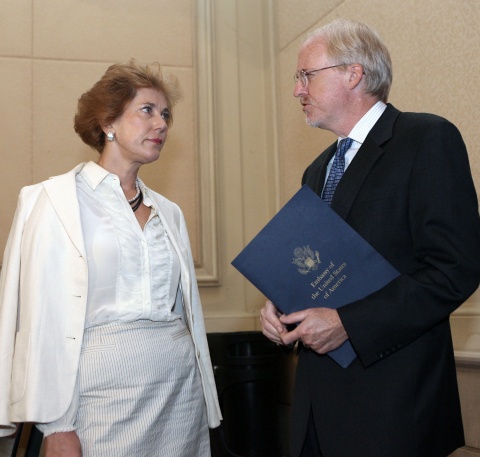 A 2008 diplomatic cable by former US Ambassador to Bulgaria John Beyrle is shading light on the steady pressure exerted by US officials on the Government of Bulgaria to expand its Afghan contribution with new contingent.

The cable, dated March 27, 2008, has been released by WikiLeaks and their Bulgarian partner, the site for investigative journalism Bivol.bg.

In addition, the cable reveals that Bulgarian Ambassador in Washington, DC, now serving a second term there, Elena Poptodorova and then Deputy Defense Minister, Sonya Yankulova, have informed Beyrle about plans to increase the Bulgarian contingent in Kandahar by fifty rangers, months before the official decision of the Bulgarian cabinet.

In two separate meetings, Poptorova and Yankulova have stressed to Beyrle that this had been sensitive information while the diplomat wrote in the cable, classified as secret, that both ladies must be under a strictly protect status.

"Bulgaria is set to announce a decision to deploy an additional 50 soldiers to take over the Entry Control Point Number Four mission at Kandahar Airfield.  It is keeping this decision under tight wraps for now.  We expect the formal decision will be made just before the NATO Summit, and the announcement itself probably in Bucharest by the Prime Minister.  Both Ambassador Poptodorova in Washington and Deputy Defense Minister Yankulova (strictly protect) have foreshadowed this outcome and the sensitivity of the decision and announcement timing," Beyrle informs in his report.

"While a formal decision is still days off, and there is still some scope for a mis-step, we would be surprised if Bulgaria does not come through," the Ambassador concludes.

The decision to increase the Bulgarian contingent in Afghanistan by 50 more rangers was not announced in Bucharest, but two months later, on June 10, 2008, Bivol.bg remind.

At the end of the cable, Beyrle gives high marks to then Prime Minister, Sergei Stanishev, and his Deputy Prime Minister and Minister of Foreign Affairs Ivailo Kalfin, for the demonstrated significant political leadership in maintaining a pro-NATO course.

According to Bivol.bg, in the 251 000 cables published by WikiLeaks, the directive strictly protect is mentioned 1 881 times and 8 times in cables sent from Sofia while only three of the sources to be strictly protected are Bulgarian officials.

Another diplomatic cable, published in June, revealed that in 2003 then Chief of Staff, and now Chief of Staff of President, Georgi Parvanov, Gen. Nikola Kolev has "leveled charges of corruption within the Ministry of Defense, MOD, in a (thus far) still secret report delivered to the President and senior MOD leaders." Kolev is the third official designated to be strictly protected in diplomatic cables sent from Sofia. After the information was revealed, the Bulgarian State Agency for National Security, DANS, announced they are probing Kolev's case.

Ambassador Poptodorova is quoted telling Bivol.bg that she was aware of the text of the cable and has nothing to comment on it.

Stanishev has also been approached by the investigative journalism site. He said that "the cabinet's decision on Afghanistan had been made in June, but there were many discussions prior to it." He had no recollection of Poptodorova and Yankulova being authorized to inform the Americans, but pointed out it was very likely their move was approved by then Foreign Minister Kalfin and Defense Minister, Nikolay Svinarov.

Stanishev further told Bivol.bg that he was satisfied his cabinet had been considered a predictable and reliable NATO partner all while being able to protect the lives and the health of Bulgarian rangers who were never sent to battle as were their Romanian counterparts.

Kalfin and Yankulova have not been available for comments.