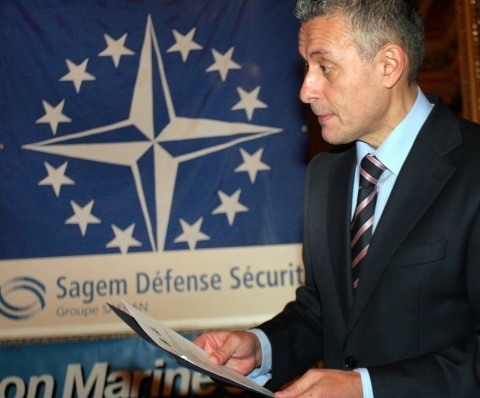 Note: This is the first article of Dr. Solomon Passy on the 10th year since 9/11. His second article READ HERE

9/11, i.e. September 11, 2001, Brussels. Bedford Business Hotel, no luxury. Time for afternoon tea, the English way. I am the Minister of Foreign Affairs selected just weeks ago. Bulgaria's Prime Minister is Simeon Saxe-Coburg, and Petar Stoyanov is the President.

The official purpose of my visit: negotiations for Bulgaria's NATO and EU membership as well as a term in the UN Security Council. The undeclared priority: the freeing of the Bulgarian "HIV trial" medics in Libya. The subject of my visit: a meeting with the person performing the office of James Bond in the British foreign intelligence, Sir Mark Allen, Deputy Director of MI-6. Sir Mark is the world intelligence guru on the problems of the Muslim world and terrorism. My meeting was arranged by the British Ambassador in Sofia Richard Stagg, whose friendship with me was cemented by common views and actions during the Kosovo Crisis in 1999.

A tall and friendly person with dignified presence and the appearance of an Oxford professor of Old English literature carrying is entering the bar with a small bag under his armpit. His look is warm but seems all permeating. And his Shakespearian English confirms his identity – Allen, Sir Mark Allen.

We had singled him out as a voluntary consultant on our strategy that later led to the hard-won but dreamed of outcome of the Libyan HIV trial. Even though my roots are from the Maghreb, the city of Fez in Morocco ("Passy" means "from the city of Fez"), I was really worried about applying strategies and theories in a field where I was greatly outmatched by my interlocutor. But I was a politician and had to take up my fair share of this challenge.

I know that the more details you miss, the more briefly you ought to talk. I told Mark something that the Tsar (i.e. Bulgaria's former Tsar and Prime Minister in 2001-2005 Simeon Saxe-Coburg – editor's note) had encouraged me about: in order to be successful in the talks with the Libyans, we need to learn to think as they do (but it shouldn't even cross your mind to make them think as you do!). Then we can earn their trust, and this is critically important so that we can achieve an agreement. Mark, who was speaking with love and encyclopedic knowledge about the Muslim world, as well as perfect Arabic, waited exactly for that in order to introduce me to the maze of the Islamic trust, the Bedouin pride, and Arab haggling. This is how Mark became our bond with Col. Muammar Gaddafi's most trusted advisor – Moussa Koussa, the enigmatic chief of the Libyan intelligence. (It is no coincidence that he already lives in London.)

So the rumble of 9/11 gave birth in Brussels to Bulgaria's silent diplomacy on the Libyan trial. It was crucial for our success. But not sufficient. Parallel to that, we had to satisfy the needs of the Bulgarian society for information as well as to bring humaneness and inspire hope (as much as possible) in our tormented medics. Our contacts with Seif Al-Islam Gaddafi, the Libyan Foreign Minister Abdulrahman Shalgam, and all global, European, American, Arab, and Muslim leaders – in addition to contributing a huge amount of work – were enough to satisfy the hunger for information. And our first breakthrough in our relations with Libya allowed us permanent contacts with our medics.

9/11 set dozens of questions before the world. Two of them affected Bulgaria: do Libya and Iraq possess weapons of mass destruction (WMDs)? As far as Iraq was concerned, in spite of the allegations that led to the international intervention, no WMDs were found. So, even though wrong hypotheses were used, the right outcome was achieved: the Iraqi people was freed from its dictator, and took its fate in its own hands. Saddam Hussein was captured on December 13, 2003 (for which Gen. James Johns had warned me several weeks earlier so I was not surprised).

And a week later, on December 19, 2003, also taken aback by the shocking images of Saddam's toppling, Col. Gaddafi declared complete renunciation from WMDs. (London and Washington also made parallel statements on the achieved agreement behind which, of course, stood the brains and silent diplomacy of Sir Mark). Gaddafi's statement was as if custom-made for my visit in Tripoli on December 19-20, 2003. I had planned my visit in the month in which Bulgaria and I chaired the UN Security Council. I was the first Western statesman received by Col. Gaddafi after this historic agreement. I welcomed it in my capacity as the Chair of the UN Security Council. It really could have pushed Libya into the right direction, if Gaddafi had so wished. But the colonel did not account for the realities, and this led to the infamous outcome in September 2011.

9/11 provoked innovative thinking in the Bulgarian Foreign Ministry, of which I was in charge, in unexpected directions. My mobile phone, as well as all others, had been shut in the hours after the attacks. I was in the unenviable situation a Minister in exile. I realized that something had to be done for this to never occur again.

Subsequently, in 2004, the Foreign Ministry started to introduce the Transat communication system that not only guaranteed a quality connection of the Bulgarian capital with the embassies around the world but also intersected various possibilities for espionage from the East. This was not to the liking of the evil forces represented by nostalgic circles around the former State Security (i.e. the intelligence of the Bulgarian communist regime – editor's note). And they, led by the Chief Prosecutor, in 2005, charged me with espionage in favor of Israel (an Israeli company which was sub-sub-sub-contractor of Transat had produced a small detail in the communication system). Thank God, the reason of democracy prevailed and I was released.

In addition to the mobile phone connections, all flights to and from Brussels were also terminated. This is how Bulgarian Prime Minister Simeon Saxe-Coburg's first visit to Brussels was precluded, as was my return to Sofia. I traveled off to Luxembourg. On that day of reflection, there was one question racking my brain: what would be the best strategy for our reaction in this truly unknown and dangerous environment? Every crisis offers opportunities as long as one invents them.

After my return to Sofia on the 13th, based on the election campaign platform of the National Movement for Stability and Prosperity party, we came up with a draft letter from Bulgarian Prime Minister Simeon Saxe-Coburg to US President George Bush, in which we assumed a long-term commitment that Bulgaria would act immediately and in the future as an actual member of NATO and ally of the USA, with all responsibilities stemming from that, including from Article 5 of the North Atlantic Treaty.

The Prime Minister made his corrections, and the letter was sent off the same day. This letter became our foreign policy Bible all the way till 2005. For me personally, it became a shield against constant attacks by various ill-wishing critics who disputed my actions, their legitimacy, and collectiveness.

That is how 9/11 swept Bulgaria and nine other NATO and EU candidates into a new political culture that was later rightfully described by US Defense Secretary Donald Rumsfeld as a "New Europe". New Europe expanded and solidified the Euro-Atlantic Community in 2001-2007 with vigor never seen before. Perhaps 9/11 catalyzed Europe's globalization just as World War II brought about the creation of NATO and the EU, and of the new world order.

But I am going back to the Bedford Hotel in Brussels, 9/11. While we were talking with Sir Mark about Libya, on the TV set in the hotel bar CNN was showing again and again the images that became some of the most broadcast footage in the last decade – the planes crashing one after another in the Twin Towers in New York, the Pentagon in Washington, Pennsylvania.

The first of my series of memorable meetings with Sir Mark Allen in Brussels, London, and Sofia was brief but decisive about the outcome of the Libyan HIV trial. In 2004, Sir Mark retired from the MI-6 (to the extent that this is possible in his field) but the effect of his help was felt all the way until July 24, 2007, when the freedom of our medics was ultimately achieved with the leading role of French President Nicolas Sarkozy.

Mark took his small bag, and without showing any panic, with a measured tread, just as friendly, he set off for the railway station to get on the train to London. He had left a little tea in his cup...

Sir Mark Allen had realized that a new geopolitical age had just begun.