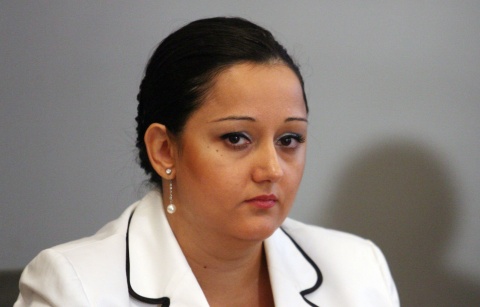 Lilyana Pavlova was the favorite for taking over the cabinet job, very dear to Borisov's heart as it is in charge of building highways, on which he has pinned lots of hopes to boost lagging support among voters. Photo by Sofia Photo Agency

Lilyana Pavlova has been appointed Bulgaria's Minister of Regional Development and Public Works after parliament approved her nomination on Friday.

A hundred and sixteen members of parliament supported Pavlova's nomination, 37 – voted against, while two abstained.

Pavlova will replace Rosen Plevneliev, the most successful minister in the center-right government of Boyko Borisov, who quit his cabinet post to run for president on the ticket of the ruling Citizens for European Development of Bulgaria, GERB, party in the October 23 elections.

The other top contender for Plevneliev's post had been the current Minister for the Management of EU Funds, Tomislav Donchev, and the decision had been difficult for Prime Minister Borisov, who has taken it at the very last minute, according to reports.

Until now, Pavlova was one of Plevneliev's Deputies, in charge of the operational programs at the Regional Ministry and had been very successful in the absorption of EU funds. The name of her replacement is yet to be revealed. Lilyana Pavlova was the favorite for taking over the cabinet job, very dear to Borisov's heart as it is in charge of building highways, on which he has pinned lots of hopes to boost lagging support for the government among voters.

Sources say Pavlova has been picked for Plevneliev's successor since Borisov considers continuity in the regional ministry team to be very important and insists that the pace of work there does not slacken.

Pavlova was born on December 6, 1977. She has a PhD in Economics, a Master's Degree in Public Administration and European Integration, and a Bachelor's Degree in International Economic Relations.

Her professional career began in 1997 when she started working as financial manager under the PHARE EU program BG 9315 in the Managers' Training Program. In 1998 and 1999, Pavlova was Office Manager under the PHARE Program of the Tempus Project. From 1999 to 2002, she worked as ISPA program expert at the Regional Ministry. From 2002 to 2009 (when she was appointed Deputy Regional Minister in the new GERB cabinet), the new Minister has been Department Head of the Financial Management, Control, and Certification of EU Funds Unit within the National Fund Directorate at the Finance Ministry. Pavlova is fluent in English and Russian.