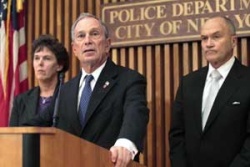 FBI officials have confirmed a "specific, credible threat" ahead of the 10th anniversary of the 9/11 attacks, possibly in New York or Washington D.C., pointing out that Al Qaeda has shown interest in important dates.

"Al-Qaeda has shown an interest in important dates and anniversaries. In this instance it is accurate that there is credible, specific but unconfirmed information," the FBI Assistant Special Agent in Charge of the New York office, Janet Fedarcyk, said on Thursday evening, speaking at a news conference alongside New York City Mayor Bloomberg and Police Commissioner Raymond Kelly.

An anonymous counter-terrorism official told the Associated Press that authorities had been investigating the intelligence since it was received late on Wednesday.

These measures could include checking bags and additional security personnel on public transport.

In the days leading up to the anniversary Commissioner Kelly told the BBC he had concerns about a new threat.

"We are worried specifically about something happening on the anniversary of 9/11 because we saw on some of Bin Laden's materials that there was discussion about the 10 year anniversary, the 10 year memorial.

"There is no doubt that New York is safer now than it was 10 years ago, but there are no guarantees. We don't know what we don't know and we are doing everything that I believe we can do to protect the city, but it is a dangerous world," he added.

Officials noted that documents seized during the raid of Osama bin Laden's compound on 2 May 2011 in Abbottabad, Pakistan, showed the al-Qaeda leader was considering strikes to coincide with the anniversary.