US to Veto Palestinian Independence Bid in UN Council 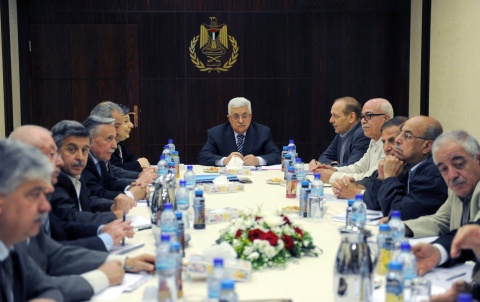 A photograph supplied by the Palestinian Authority, shows Palestinian President Mahmoud Abbas (C) chairing a meeting of the Palestinian Executive Committee in in the West Bank town of Ramallah, on 08 September 2011. EPA/BGNES

The USA will veto in the UN Security Council a move for the UN recognition of a Palestinian state, Obama Administration officials have confirmed, ahead of expected Palestinian statehood request.

"Yes, if something comes to a vote in the UN security council, the U.S. will veto," State Department spokeswoman Victoria Nuland said Thursday, as cited by The National Post, adding that such a move by the Palestinians "should not come as a shock."

In Ramallah, the Palestinian leadership confirmed on Thursday that it intends to make a formal request that the United Nations accept the State of Palestine as a member.

Nuland said it was still uncertain whether the Palestinian request would come to a vote and said the United States believes "the best route forward is to come back to the negotiating table."

Earlier, Wendy Sherman, President Barack Obama's nominee for undersecretary of state for policy, the department's third-ranking position, told the Senate during confirmation hearings that "if any such resolution were put in front of the Security Council, then we would veto it", referring to a Palestinian bid for UN-recognized independence.

"The United States is very resolved to a veto threat in the Security Council," Sherman said, as cited by The Jerusalem Post. "What we are very resolved about as well is urging the parties to enter into direct negotiations again."

While a Security Council veto would deny the Palestinians official member status, they could also seek upgraded observer status at the General Assembly as a non-member state.

This could be interpreted as implicit UN recognition of Palestinian statehood because the assembly would be acknowledging that the Palestinians control an actual state. The advantage of this option is that it would require only a simple majority of the General Assembly. Since around 120 countries have already recognized the state of Palestine to date, it would most likely win such a vote, The JP points out.

If the Palestinians were to be recognized as a non-member state, they would be able to sign certain international treaties, such as the Rome Statute of the International Criminal Court, which they cannot currently sign, the paper adds.

Some 100 members of the grassroots `National Campaign Palestine: State no. 194` drafted the request. However an official statehood request has yet to be submitted by the Palestine Liberation Organization (PLO).