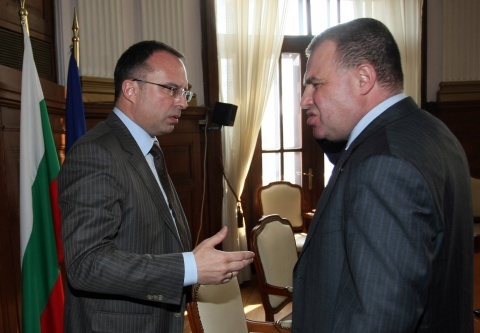 The news was announced by the Fund's press center Thursday.

With Grudev, who is going to be in charge of the Technical Inspectorate, the Deputy CEOs are now four.

Vasil Grudev was born in 1980 and has a law degree from the Franche-Comte University in Besancon, France. In 2005, he earned a PhD and started working as assistant lecturer with the Law Department of the Robert Shuman University in Strasbourg. In 2006, he was hired by the State Fund Agriculture and since 2009 was Head of its Technical Inspectorate.

The Inspectorate is in charge of conducting on spot and on location checks before farming subsidies are paid. Until several months ago, this sector was led by a Deputy Director, but at the end of March the entire leadership of the Fund was replaced and the post was closed.

Agriculture Minister, Miroslav Naydenov, announced then that the Inspectorate will be downgraded to a department.

"The increase of the leadership is led by the desire to improve the institution's organization and optimize its activities," the Thursday press release reads.

In March, when the Bulgarian government replaced the entire senior management of the State Agriculture Fund, the official motive of Minister Naydenov for the reshuffle was to improve the work on the EU rural development program but a corruption scandal is still believed to likely be at its heart.

This was not the first time the Bulgarian State Agriculture Fund had been rattled by scandals – in 2008, the European Commission froze Bulgaria's SAPARD program funding (the Fund acted as Bulgaria's SAPARD Executive Agency back then) over violations, and in 2010, the head of the Fund, Kalina Ilieva resigned after hiding her pregnancy, and was then revealed to have acquired the position with a forged diploma from a German university.

In March, Rumen Porozhanov, who has been the head of the cabinet of Finance Minister Simeon Djankov, became the new executive director of the Fund. Until now, the three deputy directors were Svilen Kostov, former head of the Direct Payments department in the Fund; Ivan Kapitanov, who was a director of a department at the Finance Ministry; and Svilen Kolev, another "career" civil servant in the Fund.

The real reason suspected to be behind the March reshuffle was a letter of a senior official released by the right-wing opposition Union of Democratic Forces (UDF), which indicated corruption in the Fund and the Agriculture Ministry.

The letter alleged to be authored by Svetoslav Simeonov, then outgoing head of the Fund, from the time when he was a deputy director in 2010 – to his then superior Kalina Ilieva, in which Simeonov complains he had been receiving telephone calls and orders from the cabinet of Agriculture Minister Miroslav Naydenov to favor certain companies with respect to the allocation of EU subsidies.

UDF sent to the Prosecutor's Office Simeonov's alleged letter to Ilieva as well as older correspondence by Ilieva indicating her concerns that officials from the Fund might have been pressured. The prosecutors confirmed at the time that they are investigating the Fund for trading with influence.

Naydenov and the outgoing Fund head Simeonov have denied all accusations; furthermore, they claimed that Simeonov's letter leaked by the UDF was fake, and showed that there was another document in registered in the State Agriculture Fund that had the same number as the alleged letter.

Announcing the reshuffle in March, Agriculture Minister Naydenov also refuted speculations that the changes might have been caused by recent unrest among Bulgarian grain producers.

Bulgaria's State Agriculture Fund is managed by a Governing Board of 11 members chaired by the Agriculture Ministry, while the operational management is carried out by an executive director. The Fund has a central office and 28 regional directorates.