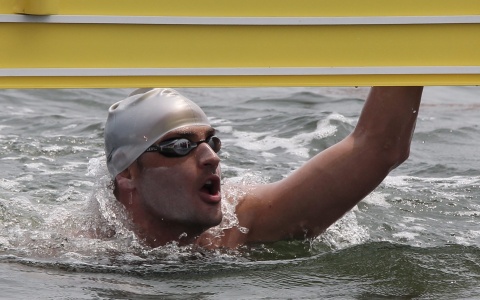 Stoychev swam the 10K distance in 1 hour 53 minutes and 26 seconds, crossing the finish line a mere 8.5 seconds after the winner, Thomas Lurtz of Germany.

Tanya Bogomilova, Secretary General of the Bulgarian Swimming Federation and the winner of Bulgaria's first Olympic gold in the 100 m breaststroke in
the Seoul 1988 Olympics, participated in the panel of judges at the swimming event.

On the women's side, Martina Grimaldi of Italy finished first, completing the distance in 2 hours and 18.6 seconds.

In end-July, Stoychev won a gold medal at the 25K race in Shanghai amid water temperatures just within the safety limit.

Of 35 men entered in the Shanghai race, only 19 finished, with 10 pulling out before the end. Six decided not to start.

Despite the 25K triumph, Stoychev failed to get a quota place for London 2012, finishing 27th in the 10K open water event.