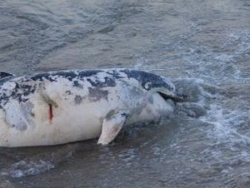 Photo of the dead dolphin found on September 01. Photo by burgasnews.com

Another dead dolphin has been washed ashore on the beach near the salt-mines in the Black Sea city of Burgas.

The tip-off was given at 9 a.m on Tuesday on the 112 emergency phone line and a response team was immediately dispatched to the site.

According to preliminary reports, the dolphin has not been shot.

On September 02, a dead dolphin in an advanced stage of decomposition was discovered near the southern Bulgarian resort town of Sozopol. The cause of the death was not disclosed.