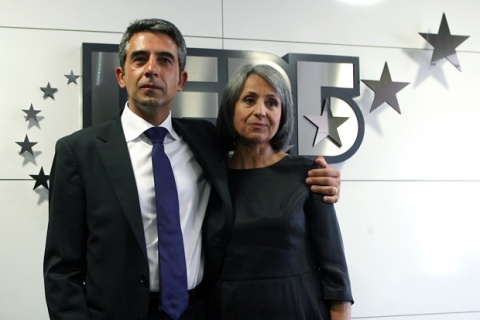 The American Embassy in Sofia sent at the end of July 2009 a diplomatic cable which includes short biography notes about the ministers from the newly-appointed GERB cabinet.

The cable was prepared after the center-right Citizens for European Development of Bulgaria, GERB, party won the general elections. It has been released by WikiLeaks and their Bulgarian partner, the site for investigative journalism Bivol.bg.in the aftermath of Prime Minister, Boyko Borisov, announcing  GERB's nomination for president – Regional Minister, Rosen Plevneliev, and for vice president – Justice Minister, Margarita Popova.

The notes contain positive assessments on almost all new ministers in exception to Economy and Energy Minister, Traicho Traikov, who is labeled a "surprise and an Yuppie."

Here is how the unnamed American diplomat assessed Rosen Plevneliev and Margarita Popova, whose presidential nominations were announced one day earlier:

"ROSSEN PLEVNALIEV - REGIONAL DEVELOPMENT:  Intelligent and soft-spoken, Plevneliev has a respected name in the construction business.  His entry into politics is attributed to ties with media tycoon and industrialist Ivo Prokopiev, who is close to Borissov. Plevneliev will face a tough challenge to win back the EU's confidence after last year's corruption scandals.  Plevneliev is also on the Board of Directors of AmCham Bulgaria and will receive a warm welcome from U.S. investors.

MARGARITA POPOVA, JUSTICE:  A long time partner in DOJ programs, Margarita Popova is a career magistrate with over 20 years experience in the Prosecution Service.  She enjoys a good reputation among her colleagues who describe her as an open, energetic, disciplined and gutsy person. If approved by Parliament, Popova will be the third woman Justice Minister. "

As Bivol points out, the cable has been sent by an anonymous diplomat at the time the American Embassy in Sofia has been in transition – between the departure of Ambassador, Nancy McEldowney and the arrival of current Ambassador, James Warlick. The report lacks details, good insider information and a serious approach.

One of the starkest examples for the above is the assessment of then Foreign Affairs Minister, Rumiana Jeleva, whose hearing as the EU Commissioner-Designate turned into a huge embarrassment for Bulgaria. In the cable Jeleva is portrayed as a "respected sociologist and lecturer at Bulgarian universities and abroad."

Full text of the cable follows below.

classification: UNCLASSIFIED//FOR OFFICIAL USE ONLY

1.  (SBU) SUMMARY:  PM-designate Boyko Borissov formally submitted his cabinet to President Parvanov on July 23, parliamentary approval expected on July 27.  The cabinet of 16 (vice 18 in the former government), including two deputy PMs (vice 4) is a nearly even mix of GERB party members and Western-oriented technocrats from outside the party.  The technocrats are not all experienced in government but they are well-qualified and without the taint of corruption. One significant surprise is Traycho Traykov, a little-known lawyer for an Austrian power company, for the critical Economy and Energy ministry.

2.  (SBU)  The cabinet choices signal a change in direction and seriousness about reform; they will likely receive wide public support.  Key ministries of Interior, Defense and Foreign Affairs have gone to close embassy contacts.  The choice of technocrats is not surprising, as the young GERB party has few of its own experts. The cabinet reflects the change Bulgarians voted for on July 5. Expectations will be high.  The new government will need to take quick steps to address effects of the economic crisis and show it is really fighting corruption if it wants to reestablish faith in Bulgarian institutions among the people and with the EU.  It will look to us for guidance and be very receptive to us for advice.  END SUMMARY.

3.  (SBU)  Reducing and consolidating government as promised in the campaign, Borissov abolished the State Administration and Emergency Situations ministries; the positions of Deputy PM for EU Funds Management and Minister for European Affairs; moved tourism and forestry to the Economy and Energy ministry; moved youth and science to Education; and shifted the Agency for Information Technology to the Ministry of Transport.  There is one new ministry, Physical Education and Sports.  Borissov did not separate Economy and Energy into separate ministries as expected.  Speculation is that it will happen in a few months once the new government is settled in.

TSVETAN TSVETANOV, DEPUTY PM, MINISTER OF INTERIOR AFFAIRS: Tsvetanov (44) was Borissov's right hand during his time at the MOI. When Borissov started GERB, he made Tsvetanov party chairman as Bulgarian law bans mayors from serving as party leaders.  Loyal, hard-working, non-controversial and void of charisma, Tsvetanov was the ideal figurehead to chair GERB without posing any threat to its real leader.  He is faced with a major overhaul challenge at the MOI but is respected by the police and has Borissov's strong backing. Tsvetanov is very open to the embassy and advice from U.S. experts. He visited the U.S. in June 2008 as a participant in a State Department-sponsored single country program on party-building and U.S. foreign policy.

SIMEON DYANKOV, DEPUTY PM, MINISTER OF FINANCE:  Dyankov (39) worked at the World Bank Headquarters in Washington from 1995 to 2009.  He is ranked among the 150 most cited economists in the world according to IDEAS/RePEc (Research Papers in Economics).  Though Dyankov's skills are impressive, he is a newcomer to Bulgaria (he left to study in the U.S. in 1991) and to Bulgarian politics (he joined the GERB economy team earlier this year).  To his advantage, he is a new face without baggage from past, but he will be working in a very different environment from the World Bank.  As a minister he is facing tough challenges; especially (possible) talks with IMF for an agreement and improving the use of EU funds, all while trying to satisfy high public expectations.

NIKOLAY MLADENOV, MINISTER OF DEFENSE:  Mladenov (37) entered politics at a young age, working at the Open Society Foundation and the World Bank.  In 1999 he founded the European Institute in Sofia and served as its first director, playing an important role in Bulgaria's accession to NATO and the European Union.  His public statements continue to show strong support for Bulgaria's integration into EU and NATO.  In 2001, he was elected MP for the Union of Democratic Forces (UDF) and rose to Deputy Chairperson but quit in 2005 after party infighting.  In 2007 he entered the European Parliament as a GERB delegate, where he worked on defense issues.  Mladenov has not served in the military or Defense ministry and would have preferred the Foreign Ministry post, but Borissov said there was "no one else I can trust" with Defense.

RUMIANA ZHELEVA, FOREIGN MINISTER:  Zheleva (40), a respected sociologist and lecturer at Bulgarian universities and abroad, was elected GERB MEP in 2007.  During her first mandate in the EP she was a member of the Committee on Regional Development and the Delegation for relations with the Maastricht countries.   In June 2009 she won a second mandate and became one of the European People's Party's ten vice chairpersons.  Zheleva is intelligent and makes a good impression, but her foreign policy experience is limited.

TRAYCHO TRAYKOV, MINISTER OF ENERGY, ECONOMY AND TOURISM:  Called "the yuppie" by his colleagues, Traykov was unknown to Bulgarian politics before Borissov's surprise choice.  Traikov has had no previous public exposure and colleagues describe him as very intelligent but "a silent, not a leader type."  There is speculation his nomination was supported by the so-called Plovdiv lobby of oligarchs close to Parvanov.  There are rumors of a personal link to proposed Finance Minister Dyankov.  Since 2006 Traikov has worked as a legal advisor for Austrian power company EVN.

MARGARITA POPOVA, JUSTICE:  A long time partner in DOJ programs, Margarita Popova is a career magistrate with over 20 years experience in the Prosecution Service.  She enjoys a good reputation among her colleagues who describe her as an open, energetic, disciplined and gutsy person. If approved by Parliament, Popova will be the third woman Justice Minister.

ROSSEN PLEVNALIEV - REGIONAL DEVELOPMENT:  Intelligent and soft-spoken, Plevneliev has a respected name in the construction business.  His entry into politics is attributed to ties with media tycoon and industrialist Ivo Prokopiev, who is close to Borissov. Plevneliev will face a tough challenge to win back the EU's confidence after last year's corruption scandals.  Plevneliev is also on the Board of Directors of AmCham Bulgaria and will receive a warm welcome from U.S. investors.

MIROSLAV NAIDENOV - AGRICULTURE:  Naidenov spent most of his professional life in veterinary medicine.  He is Chair of the Expert Committee on Agriculture and Forestry in the GERB party.  In 2008, Naidenov attended a training program for political leaders at the State Department.

TOTYU MLADENOV, MINISTER OF LABOR AND SOCIAL AFFAIRS: GERB mayor of Vratsa, won an upset victory in a BSP stronghold.  Spent most of career on trade union issues, including as representative of Podkrepa trade union and director of the Chief Labor Inspectorate.

BOZHIDAR DIMITROV, MINISTER WITHOUT PORTFOLIO/DIASPORA AFFAIRS: Prominent nationalist historian Dimitrov quit the BSP to run for GERB in Burgas and defeated the Ataka favorite.  Slated for a parliament deputy chairmanship, revelation of past work with communist-era security disqualified him.  Borissov is believed to have given him minister-without-portfolio as compensation.

5.  (SBU)  A list of the other ministers follow below.  We will send additional biographic information on them septel.