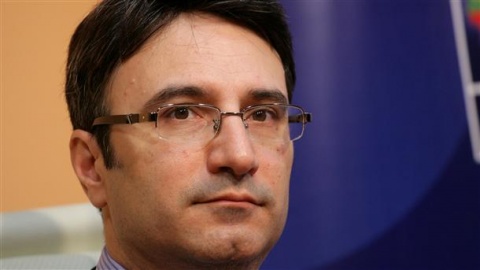 Bulgaria's Economy and Energy Minister, Traicho Traikov, explains the most important issue in the sale of the State-owned tobacco monopoly is who the investor is,not the still mysterious buyer. Photo by BGNES

The name of the actual buyer of the State-owned cigarette-maker monopoly Bulgartabac is going to be revealed very soon, Economy and Energy Minister, Traicho Traikov, promised.

Speaking Saturday from the Black Sea city of Varna, Traikov, however, stressed that the most important issue was who the investor is, not the buyer. He added that there is no guarantee about the ID of the latter, "unless it is one of the strategic ones."

The Minister explained the possibility the tobacco monopoly can be resold stands, but whoever acquires it, will have the same commitments, reiterating social ones, related to the jobs of people at the company, were among the best protected.

In an earlier TV interview, also on Saturday, the Minister said the contract guarantees jobs at the Holding, and the company's continuing pay of taxes and fees to the State. He pointed out workers there have excellent job conditions, and their labor contracts are among the most generous in the country.

When asked who is going to be the guarantor that Bulgartabac will comply with the contract, Traikov stated the control belongs fully to the Privatization and Post-privatization Control Agency.

The only member of the Agency's Supervisory Board, Rusi Statkov, to vote against the deal, declared earlier that Bulgartabac must not be sold since the contract is against national interests. The Minister stressed again the deal was a good one taking into account the current situation.

After five-hour debates on Friday, the Supervisory Council of the Privatization and Post-privatization Control Agency approved the sale of Bulgartabac to o BT Invest, a firm wholly owned by Russia's government bank VTB.

Several Bulgarian media such as the 24 Chassa and Dnevnik dailies published reports, citing unnamed sources that representatives of Corporate Commercial Bank, said to be close to Bulgarian media mogul and Member of the Parliament from the ethnic Turkish Movement for Rights and Freedoms, DPS, party, Delyan Peevski, and to DPS leader, Ahmed Dogan, and of the wine-maker Peshtera were behind the deal. These reports remain unconfirmed.

On Tuesday, after one day of examining documentation, the Bulgarian Privatization Agency approved the sale of the State-owned tobacco monopoly Bulgartabac Holding to BT Invest, a firm registered in Austria by VTB bank, property of the Russian government.

The Supervisory Board of the Privatization and Post-privatization Control Agency is a political body, elected by the Parliament. It consist of three representatives of the ruling Citizens for European Development of Bulgaria, GERB, party, one each from the opposition left-wing from the quota of the opposition left-wing Bulgarian Socialist Party, BSP, the opposition ethnic Turkish Movement for Rights and Freedoms, DPS, the right-wing Democrats for Strong Bulgaria, DSB, and the far-right, nationalist Ataka.

Also on Friday, the Bulgarian Dnevnik daily reported that the Russian Federation has submitted a request for a guarantee for a future claim against the Bulgarian State-owned cigarette maker Bulgartabac Holding, but the Sofia City Court had not examined it.

Meanwhile, the same day, the labor union of the Bulgartabac workers organized a protest rally in front of the Privatization Agency's building in Sofia. They oppose the sale of the cigarette maker to the only remaining bidder in the public procurement procedure and insist that the Governing Board rejects the offer.

In a declaration to Prime Minister, Boyko Borisov, the Union demands halting the deal and the resignation of the Privatization Agency's CEO, Emil Karanikolov. About 500 people took part in the rally.