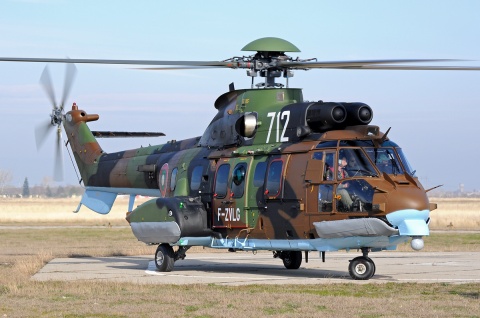 Pictured: One of the 12 Cougars purchased for the Bulgarian Air Force. Photo by BGNES

Bulgaria is in no hurry to pick a brand of strategic fighter jets and to make a purchase, Bulgarian Prime Minister Boyko Borisov stated at an event dedicated to the 100th anniversary of Bulgarian aviation.

"The modernization of the Bulgarian military will come only after we fix the infrastructure and improve people's income," Borisov told reporters at the "Sky for All" aviation show at the Krumovo Air Base near Plovdiv.

"We will buy new fighter jets only when it becomes absolutely necessary as [required by] our membership in NATO, because the planes are very expensive. One fighter jet could cost more than EUR 100 M," the Prime Minister stated.

His words can be taken to mean that the Bulgarian Defense Ministry will take its with one of its main goals – the much-talked about purchase of new fighter jets for the Bulgarian Air Force.

According to the investment plan of the Bulgarian Defense Ministry made public in April 2011, it will pour BGN 2 B in armament purchases and military modernization projects by 2020.

About half of this sum is expected to go for the purchase of new multi-purpose fighter jets for the Bulgarian Air Force. The long-anticipated armament deal has been stressed as the main priority for the Defense Ministry because at present Bulgaria still has only Soviet-made planes with even the most modern ones – MiG 29 – approaching rapidly their expiration date.

Various reports and Defense Minister Anyu Angelov himself have indicated that Bulgaria will most likely choose from among fighter jets of Swedish company Saab called Gripen, US-made F-16, and Eurofighter Typhoon. Bulgaria will probably buy 8 new fighter jets, with 2015 being the indicative delivery date.

It is unclear if Borisov's "butter before guns" statement made in Krumovo Saturday would delay further the Defense Ministry's schedule.

The Prime Minister did emphasize, however, that his government is planning to carry out a modernization of the Bulgarian military, and that he told that to the foreign companies showcasing their fighter jets at the aviation show. He said they would have to compete in giving Bulgaria the best possible price.

"The planes that we have available are actually not so few. We have also secured more flight time, and the pilots are more satisfied now. The way that we have gotten foreign air forces to come for drills at the air bases in Graf Ignatievo and Shabla provides our pilots with more practice and experience, and the fuel cost is assumed by the others' air forces," Borisov explained, as cited by Focus.

Referring to the almost completed purchase of Cougar and Panther helicopters from Eurocopter, a highly troubled deal, and the purchase of Spartan C-27J transport planes from Alenia Aeronautica, the PM said the Bulgarian Air Force had went ahead with modernization.