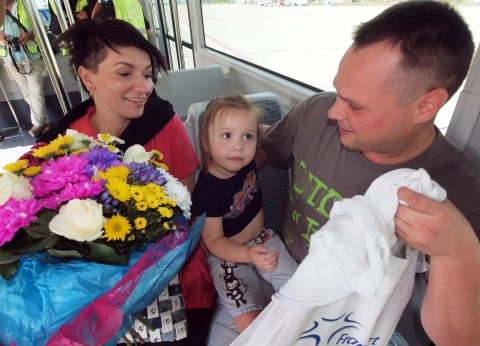 Maja (C) became the Varna airport's millionth passanger since the beginning of the year. Photo by BGNES

Maja, a two-year old Polish girl from the city of Lublin, received a special welcome to Bulgaria's Black Sea capital Varna, as she became Varna airport's one millionth passenger for 2011.

The lucky girl, who is in Bulgaria for the first time, was welcomed by the airport's director Dimitar Kostadinov and deputy director Plamen Hristov, who gave her a big flower bouquet and a lot of presents.

The girl's parents, Sylvia and Michal Fliss, expressed their gratitude for the extraordinary welcome. The family has decided to spend its summer break at the Golden Sands resort near Varna.

Some 50 000 Polish tourists have been processed at the Varna airport since the beginning of 2011. Poles are thus the airport's fourth most frequent visitors after Russians, Germans and Bulgarians.

Meanwhile, also on Friday, Bulgaria's Foreign Ministry announced that the 300 000th visa to Bulgaria has been issued in Russia since the beginning of 2011.