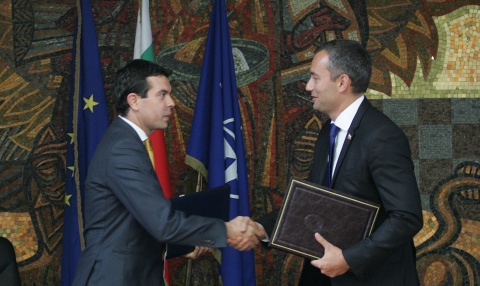 Bulgaria and Macedonia are eager to deepen their cooperation on all levels, the two countries' top diplomats Nikolay Mladenov and Nikola Poposki have agreed in Sofia.

"You can't make a friendship through a contract. A friendship is made with trust. When we have trust, we have real strategic partnership," Bulgaria's Foreign Minister Nikolay Mladenov told journalists Thursday at a joint news conference with his Macedonian counterpart.

Poposki, who was just appointed as the Foreign Minister in the third Cabinet of Macedonian Prime Minister Nikola Gruevski and his party VMRO-DPMNE, was on his first state visit to Bulgaria.

Mladenov and Poposki signed earlier on Thursday a Memorandum of Cooperation committing Bulgaria to back its neighbor on its European and Atlantic integration.

The document mandates that Bulgaria will assist Macedonia in its efforts to become a member of the European Union and NATO. The Bulgarian government hopes to effectively support the integration of its neighbor and to enhance friendly relations between the two countries.

The activities foreseen by the memorandum including the harmonization of Macedonian legislation with the acquis communautaire, the training of its civil servants and the boosting of its administrative capacity.

"Bulgaria and Macedonia are the two closest countries in the Balkans, and they are linked with a common past and a common future. We Bulgarians will be the happiest of all when we see Macedonia join the EU and NATO," Bulgarian Foreign Minister declared.

He stressed that Bulgaria had a moral obligation to help its neighbors with their EU and NATO integration.

Mladenov pointed out that the current relations between Bulgaria and Macedonia are based on the declaration signed by Bulgarian Prime Minister Ivan Kostov and his Macedonian counterpart Ljupco Georgievski in 1999.

"It is crucial that we not step back from this declaration but build upon it," the Bulgarian top diplomat stressed, adding that Bulgaria has always supported the independence and territorial integrity of Macedonia.

Mladenov did vow, however, that the two countries' diplomats would not conceal the problems between the two states. He said the diplomatic ties between Bulgaria and Macedonia in the rest years were still no match for the cordial relations between their people.

The Bulgarian government has expressed hopes that the authorities in Skopje would exert their efforts in order to terminate the hate speech and prejudice against Bulgaria, he said, adding that Bulgaria was also in favor of joint celebrations of common historical personalities and events.

Mladenov emphasized and the need to expand business and economic ties, insisting that Bulgarian business should be granted access to the Macedonian market that had been denied to it.

Macedonia's new Foreign Minister Nikola Poposki in turn expressed its content with the atmosphere of the talks with his Bulgarian colleague.

He said Bulgaria and Macedonia were looking in the same direction of a united Europe, and that economic cooperation, and especially big opportunities for infrastructure projects, are a priority.

"Keeping in mind the challenges that we faced in the past, today we can achieve a lot more and have a lot more constructive relations on all levels. This is my view and the view of my Bulgarian colleague," Poposki said.

"This way we will be going towards the end goal – making the entire region part of the EU. Not changing borders but making them purely administrative borders as part of the common European family," he added.

Poposki believes that the so defined platform of common European integration provides a good basis for progress in the relations between Bulgaria and Macedonia.

He thus refuted a propaganda piece published in August 2011 by Macedonian newspaper Dnevnik stating that some 750 000 "ethnic Macedonians" are living in Bulgaria, according to figures provided from the Foreign Ministry in Skopje.

Poposki said Poposki's visit to Bulgaria roughly coincides with the 20th year since Macedonia declared its independence from the former Yugoslavia in early September 1991.

On January 15, 1992, Bulgaria became the first sovereign nation ever to recognize the independence of Macedonia.

Macedonian press have commented that the trip of Foreign Minister Nikola Poposki to Sofia is a sign of his intention to warm up ties with Bulgaria. During their news conference Thursday, Mladenov and Poposki did not touch upon the issue of a so-called "Friendship Treaty" proposed by Bulgaria in 2008, which has provoked controversy in Macedonia due to a perceived encroachment on the affairs of the country, and has yet not received an official response from the Macedonian side.