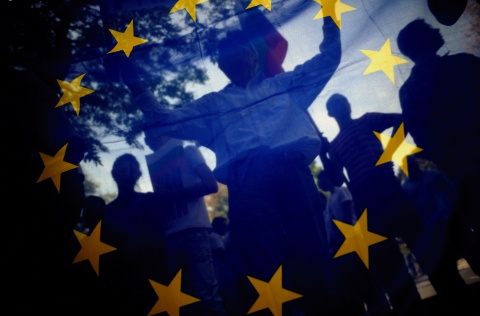 Bulgarian Roma hold EU flag during a protest in Sofia, Bulgaria 18 September 2010 . Roma activists protested in front of the French embassy in Sofia against the expulsions of Roma from France. EPA/BGNES.

The first Roma pride parade in history will take place simultaneously in many European cities on October 1 2011, the Bulgarian Helsinki Committee has announced, citing a declaration sent to it by other NGOs.

"A year after France declared its anti-Roma policy, days, months and years after the unbearable racist violence against the Roma people across Europe October 1 will be "The European Roma Stonewall! On this day, we, the leaders of the Roma and the anti-racist civil society in Europe, will carry out our duty and shout "Enough!" and "Stop!" with bravery and determination," the declaration says, as cited by the BGNES news agency.

Since last summer, France has targeted Roma from Bulgaria and Romania as potential sources of crime, in some cases deporting them to their home countries.

"Our demand is clear and simple: equal rights and equal opportunities for everyone who lives in Europe. To put in a single word: dignity," the declaration goes.