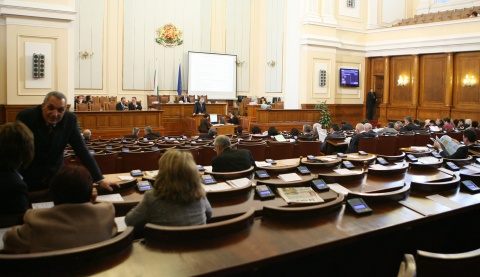 All parliamentary groups are presenting Wednesday their priorities for the new session as the MPs reconvene for the first time after their summer vacation. File photo by BGNES

The Members of the Bulgarian Parliament are reconvening Wednesday for their first meeting after the summer break, which began on July 30.

As the tradition calls, at the beginning of the new political season, all parliamentary groups will present their priorities for the new session.

The major opposition party, the Bulgarian Socialist Party, BSP, already announced that accents in their work will continue to be topics directly affecting lives of Bulgarians – the economic situation in the country, unemployment, lack of anti-crisis policies on the part of the cabinet and pressure on business. The left wing further raises alarm about the serious issue with petty and household crimes, which Interior Minister, Tsvetan Tsvetanov, and his institution are destitute in resolving.

Problems in the healthcare sector and conditions in municipal hospitals, which are facing bankruptcy, are also in the opposition's focus. BSP leader and former Prime Minister, Sergey Stanishev, announced Tuesday that his party intents to submit a BGN 1 B+ claim with the Constitutional Court, saying this amount has been robbed from Bulgarians' health insurance contributions because they are not used properly.

Left-wing MPs are further going to continue to work on the problems of local administrations.

The Socialists will back the initiative of their presidential candidate and former Foreign Affairs Minister, Ivaylo Kalfin, against possible shale gas extraction in the country.

The Tuesday legislative agenda of the Parliament, tabled by the ruling Citizens for European Development of Bulgaria, GERB, party includes amendments to the Natural Disasters Act, involving the merger of firefighter and civil defense services at the Interior Ministry.