Bulgarian Archaeologist Claims He Found 'The Temple' of Dionysus 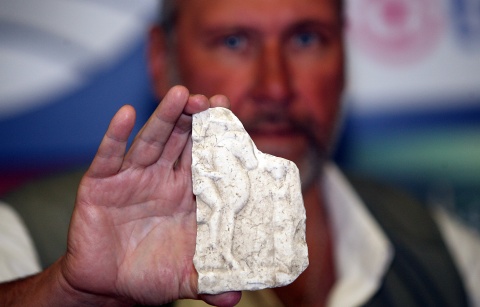 Top Bulgarian archaeologist Professor Nikolay Ovcharov has presented new finds from the Ancient Thracian and medieval fortress of Perperikon proving the existence of an Antiquity period sanctuary that he believes could be the ancient Temple of Dionysus.

"The marble reliefs of the Thracian Horseman that we have found during excavations there prove that there was a sanctuary at Perperikon," Ovcharov said at a news conference Tuesday,

The Thracian Horseman is the conventional term for a recurring motif from the iconography of Paleo-Balkanic mythology during the Roman era, believed to have been supreme deity of Ancient Thrace; he is usually depicted on funeral statues as a horseman slaying a beast with a spear.

His earlier finds also revealed that Perperikon could be a sanctuary of Ancient Greek and Ancient Thracian god Dionysus.

"We are currently excavating a very interesting object about the link between the Perperikon acropolis and the sanctuary-palace. I continue to insist that this place was of great importance," Ovcharov said.

"We know that in Perperikon, 7000 years ago, there was a rock sanctuary of the sun cult. We have seen these images on ceramics from the Stone-Copper Age, and then this persists throughout the Bronze Age, during which the altars were cut into the sanctuary. The second millennium before Christ was the most important period because this is when the entire system of rock altars, which we are now studying along the mountain range, dates back to," he explained.

He added that one of the rock altars is 3 meters in height, and existed for 2000 years, until Christianity was adopted.

"This place is a matter of disputes but there is no doubt that this was a sanctuary," Ovcharov said, as cited by BGNES.

He believes that the spot in question could be one of the greatest cult sanctuaries of the Antiquity period, the long-sought after Temple of Dionysus, which was also mentioned by Herodotus in his writings.

"This temple was as famous as the Temple of Apollo at Delphi. Two Roman historians also write about this temple. However, they don't mention that it was in the Rhodope Mountain. My hypothesis is that this was precisely the Temple of Dionysus," Ovcharov claims.

He said the archaeologists took a long time but finally managed to uncover evidence at Perperikon from the Antiquity period – including tiles, coins, and fibulas (brooches) – that indicated intensive life on the spot.

Several days ago, the archaeologists found part of marble reliefs of the Thracian Horseman with a goddess welcoming him. The back side of the marble reliefs is not smooth, which leads Ovcharov to believe that it was built into a wall and served as an icon.

It was found 4 meters away from the hall with the altar of the suspected ancient sanctuary together with an amulet with an image of the sun.

"It is believed that the Thracian Horseman, often called the Thracian Heros, was a personification of all earlier religious beliefs of the Thracians – from the creation of their religion, or that it personified their older gods," Ovcharov explained.

Earlier in August, his team uncovered evidence of an unknown Christian bishopric based in Perperikon during the Middle Ages.