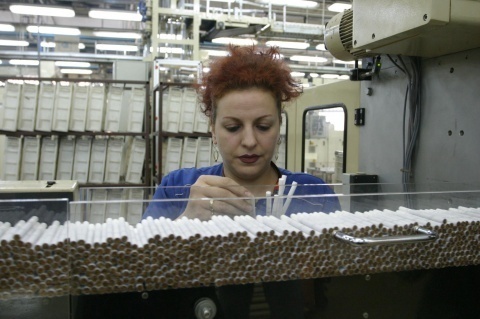 Bulgaria's tobacco industry syndicates have risen against the sale of state-owned cigarette-maker Bulgartabac to Russian-owned bank VTB, the sole bidder for the company's privatization.

The tobacco unions are preparing protest rallies against the planned privatization of Bulgartabac Holding, the head of the Tobbaco Industry syndicate at the Podkrepa Labor Confederation Yuliy Manoylov told the Focus agency late on Monday.

The syndicate leader spoke after it became clear that BT Invest, an Austrian-registered firmed owned by the Moscow-based bank VTB – the only entity to make it to the final stage of the privatization tender – has offered a price of EUR 100.1 M, or EUR 100 000 above the minimum asking price set by the Privatization and Post-privatization Control Agency.

He said the unionists would announce more details about the planned protest rallies on Monday.

"We have been claiming for months that the [privatization] procedure has not been designed the best way; it hasn't been designed in a way to serve the interests of our country, and especially the production and development of the tobacco industry," Manoylov is quoted as saying.

As the sale of Bulgartabac is supposed to be approved by the supervisory board of the Privatization Agency, the unionist said he did not expect the body would act out in protection of the public interest.

"We know that there are elections coming [in October]. This is a political body, and it will endorse a decision that is brought down to it from the political offices," he said.